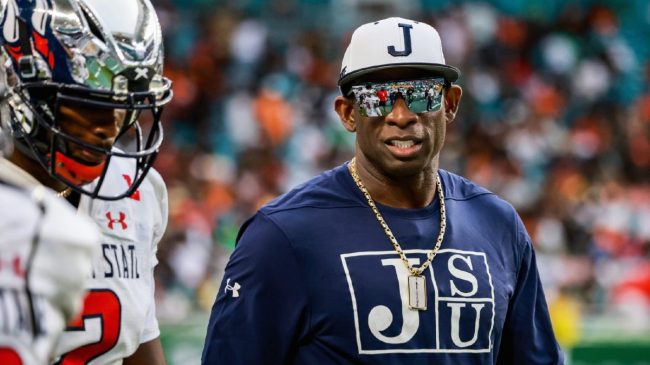 We’ve all heard crazy realignment suggestions since the news was announced that USC and UCLA would be leaving the PAC-12 for the Big Ten. That move, in its own right, is pretty wild seeing as the two Los Angeles based schools will now be forced to play halfway across the country to compete against their new conference rivals.

Since the story broke, we’ve heard theories that all the Power 5 leagues will be absorbed by the SEC and Big Ten to form two super-conferences similar to the NFL’s AFC and NFC. We’ve also heard that the ACC and Big XII will poach the remaining PAC-12 teams or that the PAC-12 will try to go after Group of Five schools on the West Coast.

No one truly knows, but there are certainly a few teams to keep an eye on. In the PAC-12, the future could lie on the decisions of Washington and Oregon. Other reports say that Notre Dame is the next major target, and that a domino effect will follow once they make a choice to either join a conference or remain independent.

The SEC and Big Ten should have their pick of the litter should they decide to keep expanding. Major programs like Notre Dame, Oregon, Washington, Clemson, Florida State, and Miami all make sense due to television markets and past football/basketball success.

On Tuesday, though, we heard the most ridiculous suggestion of all.

Carl Reed of 24/7 Sports has a plan that gets the Jackson State Tigers into the Big Ten. And it’s a wild one that involves not only head coach Deion Sanders, but also Elon Musk, Jeff Bezos, and Mark Cuban.

Reed made an appearance on a recent podcast to talk about potential candidates that the conference could target should it choose to continue expansion. Nobody saw this suggestion coming.

Is @CoachReedLive talking crazy or is he onto something here? 🤔

“When we talk college football, we all have a couple of teams in our league who can compete for a national championship. But what about the teams at the midlevel or the bottom of these leagues that are barely hanging onto the Power 5 conference? Some of those teams probably don’t belong.”

Already not the strongest argument as he’s basically calling for the league to pick up a bottom feeder rather than a national power, but it gets better.

“I think there’s one team, led by one guy, who can create a lightning rod for college football throughout the country if he listens to me right now and makes this one big-time move.

“You take your HBCU Jackson State program to the Big Ten… Give the man the money to compete with NIL money. You can create ‘Amazon’ stadium on the campus of Jackson State University, and you bring Deion to the big-time.”

It’s as simple as that.

Call up a few billionaires with no ties to the university and pitch them on funding millions for your football program. Jackson State has made headlines under Deion Sanders, but they weren’t even HBCU champs last year, losing out to South Carolina State. Now you want them in the Big Ten?

I think it’s safe to say we won’t be seeing this move any time soon.