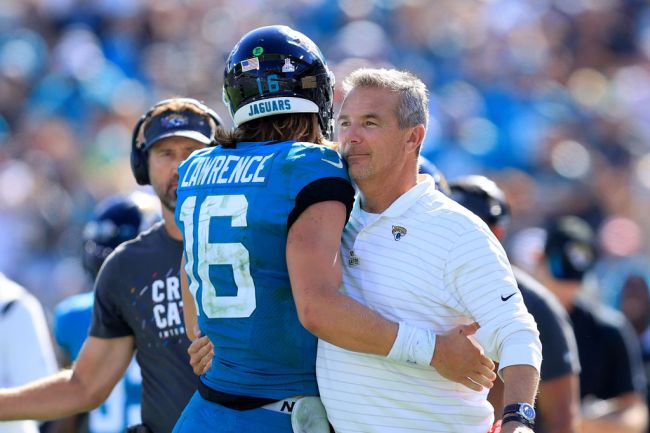 The Jaguars finally won a football game. After enduring the second-longest losing streak in NFL history, Jacksonville traveled to London over the weekend and took down Miami on a walk-off field goal.

It was the team’s first win in 399 days and Urban Meyer’s first win as a head coach in the NFL. The victory came 15 days after a video was leaked of Meyer being danced on by a woman at a bar in Columbus, Ohio.

Since then, a second video surfaced that showed Meyer getting handsy with the woman, he was forced to apologize and team owner Shad Khan said that he must regain the team’s trust and respect. The mother of the woman in the video spoke also about the situation and said that she is concerned for her daughter.

Meanwhile, reports began to circulate about how Meyer lost his team and the locker room. Not long thereafter, Jaguars quarterback Trevor Lawrence openly disagreed with his head coach’s comments about his inability to run a quarterback sneak.

And now there are allegations of a third, much worse video that has yet to be released.

Needless to say, it has been a chaotic news cycle in Jacksonville.

Despite the off-field issues, Meyer and his team got a win on the field. He addressed his team in the locker room after the win and the Jaguars were quick to post it on Sunday night.

In the caption, the team took the opportunity to share that Meyer had NOT lost his team and that there is “a lot of love.”

Additionally, after the field goal went through the uprights, Meyer was seen hugging a few of his players in celebration.

#DUUUVAL, this one’s for you. pic.twitter.com/5SckFN7wPg

While that is all fine and dandy, look at some of the faces in the locker room while Meyer is speaking. I am probably reading too much into this, but they don’t look particularly interested in hearing what Meyer has to say.

Gleeful emotion was undoubtedly running high throughout the locker room. However, for the Jaguars to try and use one speech after a monumental win to push back on the reports about the team and its relationship with Meyer is hilarious.

If that third video is real and ends up leaking, it is then that we will find out what’s really going on in Jacksonville.