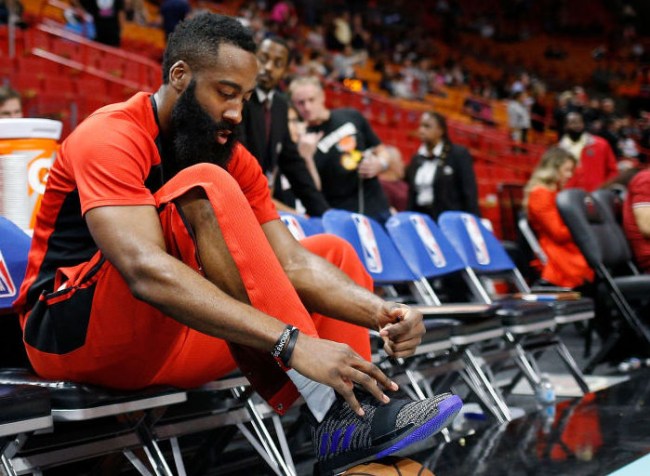 The Rockets scooped up Hakeem Olajuwon with the first pick in the 1984 NBA Draft, and while that decision certainly worked out better for them than the return the Trail Blazers got by nabbing Sam Bowie with the second selection, I’m willing to bet both franchises would’ve opted to secure the rights to the burgeoning star hailing from the University of North Carolina who the Bulls grabbed with the third pick if they got a chance to do things again.

Rookie contracts in that era left a bit to be desired compared to what you can typically expect to make if you’re picked at the top of the draft nowadays, and after inking an agreement with Chicago worth $6.3 million over seven years, Michael Jordan got some insurance money thanks to the unprecedented endorsement deal he signed with Nike, which offered to pay him $500,000 annually for the first five years of his career at a time when star players were lucky if they could convince an apparel company to give them six figures.

It didn’t take long for both sides to benefit from the agreement, as the NBA legend’s meteoric rise to superstardom resulted in the original Air Jordans generating over $100 million in sales for Nike, and since then, His Airness has made over $1.3 billion courtesy of his signature brand alone.

Nike wasn’t the force it would become thanks in no small part to its affiliation with Jordan before he signed with the company and he actually had to be convinced to partner with them, as he wasn’t a huge fan of their shoes and initially wanted to link up with a more established Adidas brand before being persuaded to go in a different direction.

Adidas has managed to recruit some other notable NBA players over the years—it got in on the ground floor after Kobe Bryant was drafted by signing him to a six-year deal worth almost $48 million before eventually seeing him defect to Nike—but it hasn’t exactly had the best return on some of its biggest investments. In 2012, it agreed to pay Derrick Rose almost $190 million over the course of 14 years only to see him almost immediately succumb to the ACL injury that derailed his career and it’s hard to think of a more regrettable deal in recent memory.

However, you can’t overlook the $200 million, 13-year endorsement James Harden landed with Adidas back in 2015, and when you consider he’s established himself as one of the most dominant players in the league since then, it’s kind of wild just how miserably Adidas has failed when it comes to capitalizing on his reputation.

Earlier this week, I was afraid that Twitter had officially broken Darren Rovell after he sent out a variation of the “On This Day In Sports” tweets that define his brand almost as much as his insufferable takes by randomly referencing Dodgeball while attempting to contextualize how long it’s been since the Maple Leafs have won a playoff series.

I’m honestly in awe of this. Twitter has apparently broken Darren to a point where he’s now contextualizing current events with entirely random pop culture references instead of “On this exact second 17 years ago” tweets. I feel bad for his brain but this is tremendous content. pic.twitter.com/y4ihGGP5FD

Thankfully, it appears Rovell’s programmer managed to identify the glitch that caused the remarkably convincing robot to malfunction, as the reporter got back to his old ways on Thursday and celebrated the fifth anniversary of the deal by throwing some implicit shade at Harden’s signature shoe with an almost rhetorical poll on Twitter.

Have you bought a pair of his signature shoes?

As of this writing, almost 96% of the people to respond to this highly scientific survey say they haven’t bought any of the four iterations of the sneakers that have been released so far. While there’s nothing particularly offensive about the core design, there’s also nothing particularly innovative about them, and after taking a glance at the colorways currently for sale on the company’s website, it seems like they can all be categorized as “The Most Generic Basketball Shoe Ever Made” or “Oh God My Eyes Won’t Stop Burning Please Make It Go Away” as opposed to falling anywhere on the spectrum in between those two extremes.

At the end of the day, Harden is still getting paid handsomely regardless of how they sell and will continue to for another eight years, so while I doubt he’s too concerned, Adidas might want to do some soul searching based on its current track record.