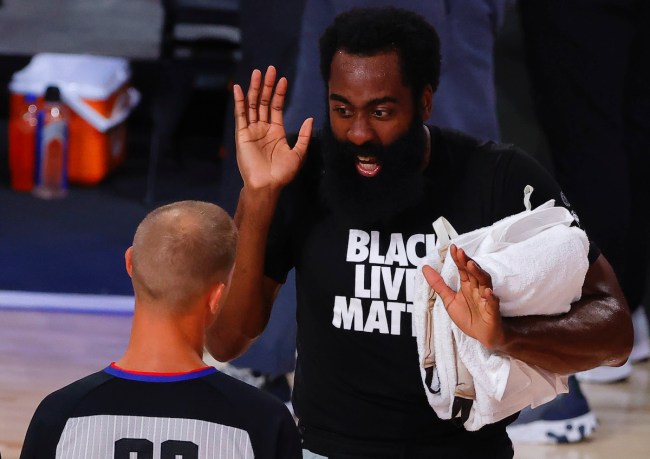 James Harden and the Houston Rockets just seem like they’re headed for a split. With months of speculation leaking out that the former league MVP is unhappy and wants to be traded — preferably to the Brooklyn Nets or Philadelphia 76ers — it feels as if the water will eventually drain from the tub and we’ll have a resolution. It may not come in the next week or even month, but it’s hard to imagine both sides forgiving and forgetting about the tension that’s happened over the past few months.

With Harden recently rejoining the team’s training camp a couple of days ago, some wondered what in the hell he was actually doing away. Was he keeping his distance as a statement to force the team to trade him? Was he just being more productive on his own? Did he want to stay safe from any potential COVID infection until he absolutely needed to be at the Rockets’ facility? Any of those could seem like legit reasons, right?

Well, James Harden was directly asked why he was away from the team, and, more specifically, why he was spotted in cities like Atlanta and Las Vegas, with videos even surfacing of him unmasked at crowded clubs. Harden’s reply? He was with his personal trainers.

Since NBA fans love to troll on Twitter, way too many weren’t exactly buying Harden’s reason, and were quick to mock the dude by tossing up who they envision as the All-Star guard’s personal trainers. Unsurprisingly, it had to relate to partying, women and pretty much everything but basketball. Take a look below at some of the A+ replies.

Harden trying to get his form just right pic.twitter.com/PzHyZDfd5L

The training has been going well. 💪🏽 pic.twitter.com/mlDmOoWTfE

Man, Twitter always wins, and, once again, social media roasted the hell out of James Harden on this one. Maybe he’ll end up getting the last laugh, though, and find himself on the Nets or Sixers to get the fresh start he wants. Right now, it sure doesn’t sound as if he wants anything to do with the Houston Rockets.