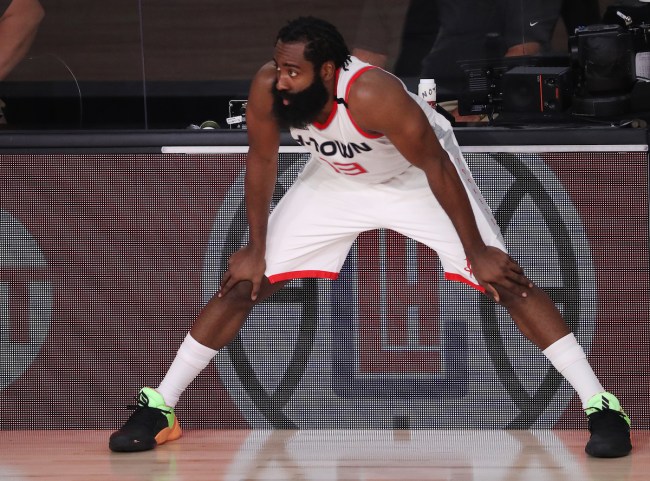 At this point, it’s nearly impossible to keep up with all the James Harden trade rumors that have been floating around for the past month or so, with every sports fan just waiting for a deal to get done. Really, it’s like watching that dysfunctional couple in a Denny’s restaurant who are arguing in public with no regard for anybody else, with everyone around knowing there’s no way in hell that couple can work things out to make it last. Yeah, that’s where we’re at with Harden and the Houston Rockets now.

The standoff between both sides is draining, with the Rockets trying to give their former MVP some space to clear his head and try to get reengaged before returning to the team, and James Harden himself using the time to try and force the franchise to ship him out of town. His preferred destination is reportedly the Brooklyn Nets, where he could play alongside Kevin Durant and Kyrie Irving. But should he get traded, is that really where he ends up? Now that’s a different conversation.

Given the Nets’ lack of assets to strike a deal for a future Hall of Famer, it’s hard to envision them acquiring Harden. That’s why ESPN’s Adrian Wojnarowski recently gave an update on who he’s hearing could be the new leader in the clubhouse for the superstar guard: The Philadelphia 76ers.

Appearing on Get Up Tuesday morning, Woj discussed all the James Harden trade rumors, and revealed why he believes the Sixers could be leading the race to acquire him.

“The arrival of John Wall and however … Boogie Cousins has looked in the preseason so far is not impacting his thinking. He wants a trade.

“Brooklyn and Philadelphia are still the teams he’d most like to go to, and the Rockets continue to work to see if there’s a way that they can get maximum value for a player they consider to be a best five in the league, and they certainly aren’t just going to give away.”

“If you are trading of a player for his stature, and you’re giving up the assets you’ll have to give up that Houston wants in his deal, you’re thinking it’s a longer term play for James Harden. But he has two years left on his deal — really three years, with a player option in that third year — and there are very few teams that are really in this.

“There are so few that have the combination of draft picks and a young player that would really interest the Rockets, and also being a contender. There’s very few, Philly is at the top of that list.”

James Harden has made it clear that "the arrival of John Wall and however … Boogie Cousins has looked in the preseason so far is not impacting his thinking. He wants a trade."@wojespn with the latest on why Philly is at the "top of the list" of teams able to make the trade. pic.twitter.com/5HzkNeEyqp

Considering James Harden recently expanded his trade destination list to include the Sixers — and the team has a championship level coach in Doc Rivers and boasts Daryl Morey as its head of basketball operations, a former Rockets GM for 13 years — it shouldn’t come as a surprise that Philly appears to have the inside track to get Harden. Problem is, will they actually go for it and make the deal?

With Joel Embiid and Ben Simmons not looking like a great match together on the floor, it’s time for the Sixers brass to either pull the trigger and swing for the fences with Harden, or try to force contrasting styles with their two, young All-Stars. Personally, the former seems more appealing, and would instantly bring new life to the franchise.

As mentioned above, it’s hard to keep up with all these James Harden trade rumors at the moment, and it feels inevitable that the Rockets do a deal. But it could also turn into that aforementioned Denny’s couple, too, where they just argue and argue until they convince themselves everything’s fine — but the tension is still obviously there, no matter what.