Warriors Bow Out Of The James Harden Sweepstakes, So Who’s The Favorite To Land The Superstar? 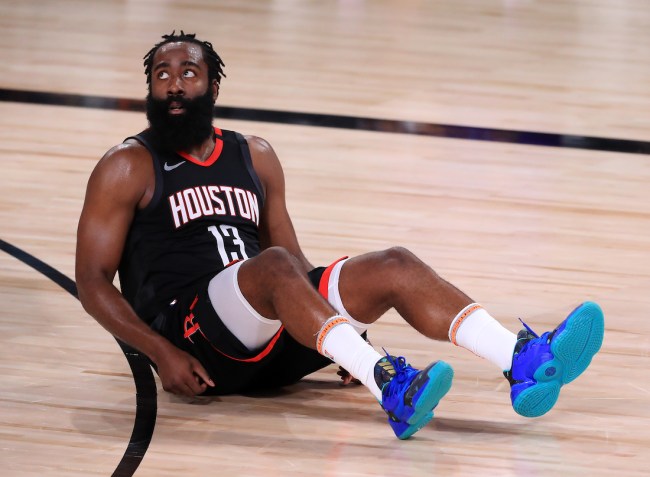 After eight seasons together, it seems clear that the Rockets and Harden are destined for a split. Like, there’s just too much of a gap here to try and mend this sort of tension between both sides, with the team having a first-time head coach about to lead the team, a new front office, and (yet another) superstar in John Wall to pair alongside Harden. It doesn’t seem like the lefty wants anything to do with any of it, though.

Let’s just assume that’s the case and that the James Harden trade rumors are more than just fiction and that he will get traded. Which NBA team will give up their future for the hope of getting an offensive machine? That’s where it gets tricky.

There’s no denying Harden’s talent, but that contract, man, it’s… crippling. Like, very few teams can even entertain the idea of taking on the remaining three years and $133 million left, and/or think about giving the guy an extension. Remember, Harden recently turned down a two-year, $103 million offer from the Rockets — not because of money, but because of team fit — so that’s probably the going rate for a future Hall of Famer. Yikes.

But there are tons of rumors and reports out there, so let’s take a look at which NBA team might end up swinging for the fences and trying to acquire James Harden.

The OG when it comes to the James Harden trade rumors, all of this talk about the former MVP being shipped out of Houston began (and may end) with the Brooklyn Nets. It’s hard not salivating at the thought of the superstar being paired with Kevin Durant and Kyrie Irving, two All-Stars who have both won an NBA title. But would Harden fit with such alpha personalities? It’s the biggest question mark, as we’ve seen other superteams flame out because of stars unwilling to sacrifice their own legacy.

The Nets have assets, a win-now mentality, and a first-time head coach in Steve Nash who (presumably) will run a similar offense as Mike D’Antoni — whom the former point guard played under during his NBA career. That all must sound titillating to Harden, which is why the franchise is reportedly tops on his list. Unfortunately for him, it’s not his choice to make, and it’s hard to envision the Rockets giving their star what he wants most given the way he’s dogged the entire franchise lately.

Wait, what?!? Yep, believe it or not, the Warriors were linked to James Harden, with the franchise potentially looking to make a serious run at a title this NBA season after hearing the devastating news of Klay Thompson’s Achilles injury. After drafting James Wiseman No. 2 overall in the NBA Draft, the Dubs had the rookie, probably Andrew Wiggins and a few future picks to dangle in front of the Rockets. But Golden State reportedly bowed out of any discussion about adding Harden.

In exploring avenues to get back into the thick of the championship chase, multiple league sources say the Warriors cast a wide hypothetical net that included James Harden. Though the vision of Harden moving into the Kevin Durant role was intriguing, the Warriors realized the return would be no better than a short-term gain while punching a hole in their future.

Every sports fan knows that no deal is ever dead, but James Harden to the Warriors feels like it’s on life support. It’s not a good fit, so Golden State is better off waiting and seeing if they can really swing big by using some of their assets on two-time reigning MVP Giannis Antetokounmpo at some point.

When it comes to adding superstars, should Pat Riley ever be counted out? Absolutely not.

After a surprising trip to the NBA Finals last season, the Miami Heat have the pieces and culture to welcome a personality like James Harden. Jimmy Butler would keep him in line, and recently re-signed Bam Adebayo would blanket some of the All-Star’s pour defense on the back end. But would this actually happen?

It’s hard to imagine the Heat giving up on the same young players who just helped them compete for a championship. Both Tyler Herro and Duncan Robinson look like studs — and they’re on cheap, rookie contracts — and the team chemistry in Miami might be too much to shake up with a superstar like Harden. That doesn’t mean there aren’t trade rumors linking the one-time MVP to South Beach.

Harden is at $41.3 million this season, $44.3 million next season, with a player option of $47.4 million for 2022-23. So, yes, the Heat could start with something along the lines of the 2020-21 expiring salaries of Kelly Olynyk and Andre Iguodala, plus Tyler Herro, and then filler, for Houston to get off the rest of Harden’s money. But is that enough for Houston?

Of all the James Harden trade rumors, seeing the guard join the Heat could be the most instantly impactful, as the team has proven it can reach an NBA Finals with the current pieces, so adding a player as uniquely talented as Harden could either put them over the edge or completely backfire. It feels like the latter scenario would be more likely.

Like the aforementioned Warriors, Miami has also been linked to Giannis Antetokounmpo, and if a team had to choose between “The Greek Freak” or “The Beard,” for so many reasons, every franchise would want Giannis.

The latest rumor now has James Harden being open to joining the Philadelphia 76ers, a team that recently hired Daryl Morey to run its basketball operations. That’s the same Morey who previously served as the Rockets’ GM for the past 13 years. Hmm…. something smells like it’s cookin’ here.

After it was clear there was no traction in talks with the Nets, Harden expressed to the Rockets that he would be agreeable if a trade with the 76ers materialized, sources said. Harden also indicated that there could be other teams that fit his criteria for a preferred destination, a source said.

The Rockets and the Sixers have had no substantive talks about a potential Harden deal, sources said. New Philadelphia president of basketball operations Daryl Morey, the Rockets’ general manager for the previous 13 seasons, has said he has no intention to break up the Sixers’ All-Star duo of center Joel Embiid and guard/forward Ben Simmons.

Teams would be reluctant to give up the assets required to get a player of Harden’s caliber without confidence that he would be willing to remain long-term. Few contenders have ability to furnish Houston with the combination of assets that it’s seeking to consider dealing Harden. https://t.co/VQlSZCrUAa

The Sixers have tons of talent on its roster, starting with Joel Embiid and Ben Simmons, but the two All-Stars don’t necessarily mesh well together on the floor. That’s led to underachieving the past couple of years, despite trying to surround the big man and point guard with complementary pieces. Could the team find a way to keep both and add the former MVP?

With Doc Rivers taking over as head coach this offseason, and he has experience leading superstars — both in Boston with the Big 3 and recently with the Clippers — so the stars seem to be aligning here. Should the Rockets trade Harden before the season starts, the Sixers have to be the current favorites.