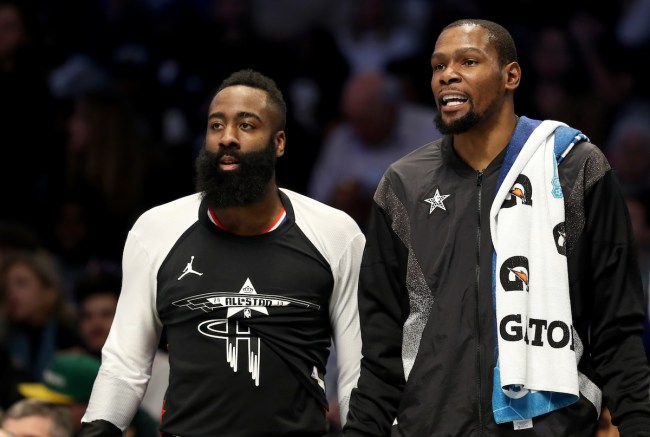 Look, I’m not here to call Kevin Durant a liar, but the dude has built a bit of a reputation of saying one thing publicly and going behind the backs of people to really voice his opinions. Anyone else remember his burner accounts on Twitter where he’s engaged with fans and has posted or said some passive aggressive things about teammates and such? Yeah, KD’s as good of a troll as he is a basketball player.

For that reason, does anybody really believe that Kevin Durant’s not recruiting his buddy and one-time league MVP James Harden to the Brooklyn Nets? If you do, you’re in denial.

For the past month, Harden trade rumors have flown all over the Internet, with many reporting the current Rockets star is trying to force his way to Brooklyn to play alongside both Durant and Kyrie Irving. Who knows if it happens, but it’s hard to imagine these three superstars aren’t in communication with one another. But don’t suggest that to KD, who shot down reports that he’s pitching the Nets to Harden.

“I don’t know where you’re making these stories up that me and James talked about any of this at a workout,” Durant said. “I don’t know where that came from. James is a friend of mine, but I let the front office handle all of that stuff. … I heard particularly that James wanted to come to the Nets, but anybody can make up stories and write a story thinking it’ll get some traction.”

Kevin Durant denies rumors that he had conversations with James Harden about playing for the Nets:

"I don't know where you're making these stories up" pic.twitter.com/TSeiFHw80K

Somebody please tell me why Kevin Durant refuses to acknowledge the fact that he and James Harden are trying to work the back channels to make a blockbuster trade occur. In the modern NBA, this is what superstars do. It happened a decade ago with LeBron James, Dwyane Wade and Chris Bosh when they strategized to join the Miami Heat in 2010 together, and, ever since then, it’s become the protocol for All-Stars to pair up and create superteams. For KD to even suggest otherwise is actually laughable — and insulting to think we’re all dumb enough to believe him.

The two-time NBA champ’s response comes on the heels of a report from Adrian Wojnarowski a couple weeks ago that claims Durant, Harden and Irving all worked out in Los Angeles together, and that the star trio remains engaged in trying to get the Rockets guard to Brooklyn.

Another Harden update from Woj: pic.twitter.com/doqxVKV8dm

Remember when both Durant and Irving denied the two ever talked about pairing up prior to the 2019 offseason? Yeah, the truth came out recently when KD admitted that viral video of the two talking in a hallway at the All-Star Game was actually a conversation about their free agency plans. Shocker!

This situation with James Harden is no different, so Kevin Durant can try to play victim of the media all he wants to, but the fact of the matter is, everybody knows the two have talked about a way to maneuver a trade, whether anyone wants to come out and admit it or not.