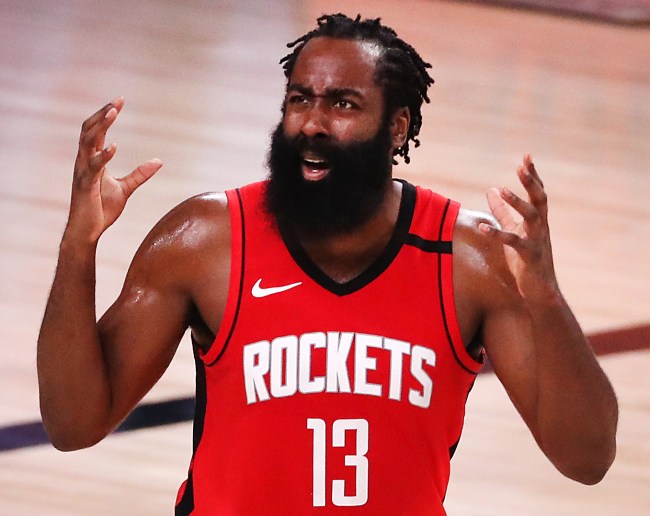 If anyone’s qualified to talk about what it takes to be a successful superteam in the NBA, it’s Ray Allen. After all, the Hall of Famer was a member of the Boston Celtics’ Big 3 in 2008 that won a title, and was then part of the great Miami Heat squad with LeBron James, Dwyane Wade and Chris Bosh, with the shooing guard winning another one ring during his two seasons in South Beach.

Winning a championship in every sport takes more than just a roster full of the best players. It takes sacrifice, leadership, humility, a little bit of luck and all sorts of other cliche traits. Ray Allen understands this, and it’s why he doesn’t feel too confident about former league MVP James Harden potentially joining Kevin Durant and Kyrie Irving on the Brooklyn Nets — a rumor that’s been picking up steam over the past week or so.

According to the former sharpshooter, who spoke Frank Isola and Brian Scalabrine on NBA Radio, should Harden be traded to Brooklyn, it could be a “train wreck,” with Allen talking about the difficulties of the three superstars meshing on the basketball court. Take a look below at some of his thoughts.

“If you look at Kyrie, you look at Harden if this happens, and then Kevin Durant, it’s going to be extremely difficult for them to get along together,” Allen said on SiriusXM NBA Radio. He pointed out that personality wise the three superstars might work great but it could be a different story when they are on the court.

“If they don’t decide that they want to win and scoring and have the ball in their hands does not matter to them. Because between the three of them KD did it in Golden State so understood… If they’re willing to do that it can be amazing what they accomplish. But if not it could be a train wreck.”

"If you look at Kyrie… Harden if this happens, and then Kevin Durant, it's going to be extremely difficult"

Hall of Famer Ray Allen tells @TheFrankIsola & @Scalabrine that if James Harden were to end up in Brooklyn he doesn't think it will work with Kyrie Irving & Kevin Durant pic.twitter.com/c3wVxGX5F8

Ray Allen is 100 percent right here, because the three players who could potentially team up together — James Harden, Kevin Durant and Kyrie Irving — are all alphas who are used to leading their teams and getting the final shot. The fact that Irving forced himself out of Cleveland in 2018 because he couldn’t mesh with LeBron James is enough of a sign for the Nets to be wary. Add in the fact that Harden had issues alongside other superstars in Houston as well (Chris Paul and Russell Westbrook), and this whole Brooklyn pairing does seem like a disaster just waiting to happen.

Just listening to Allen talk about some of the sacrifices he had to go through when joining the Celtics while still in his prime makes this Nets scenario difficult to imagine.

Can anybody imagine Harden, Irving or Durant giving up that many shots? It’s not in their DNA, and it could cause a serious problem amongst the three, and their teammates, when that whole “hero ball” mentality comes out during a game.

That said, on paper, the Nets rolling out three future Hall of Famers who can all shoot and create for their teammates could be lethal. But it takes a certain kind of personality to win with so many superstar egos, and, outside of Durant accomplishing it with the Golden State Warriors, Irving and Harden have yet to prove they can sacrifice their own legacies for the good of a team.