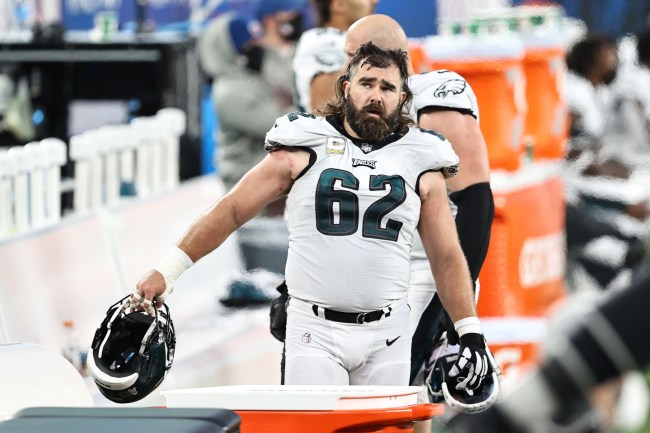 Offensive lineman Jason Kelce has been with the Eagles for 10 years, so he sort of has an idea how things are run around Philly. Sure, there have been coaches and teammates that have come and gone, but, for the most part, there’s been a consistent structure within the entire organization, and the bullish lineman is quick to defend the franchise should anybody dare talk bad about it.

Given the fact Philly’s head coach Doug Pederson is getting dragged right now for (possibly, maybe) tanking during a Week 17 game against the Washington Football Team — where the coach pulled starter Jalen Hurts in a close game to insert backup Nate Sudfeld — it’s clear people are attacking Pederson while questioning the motive of the Eagles. Hell, even Eagles running back Miles Sanders dogged his head coach’s decision, leading to speculation that there might be a mutiny happening within the locker room.

Well, Jason Kelce isn’t have any of that, because he stood up and gave his side of the story to try and clear the air.

Posting a message on his Instagram account, Kelce breaks down Pederson’s decision to bring Sudfeld into the game, and made sure to remind fans that, while unorthodox to do so, the head coach didn’t pull all of his starters. In Kelce’s words, the coaching staff wanted to give Sudfeld some real game action. Take a look below at the entire post from the Philly offensive lineman.

Now, Giants head coach Joe Judge — who slammed Doug Pederson’s decision to allegedly tank, costing the G-Men a potential shot at the NFL Playoffs — might not agree with Jason Kelce’s recount of the situation. However, whether it’s all true, partly true or completely false, this is a wily veteran move from Kelce, and shows that he’s got the back of his head coach, the back of his backup quarterback and wants everybody to leave this all behind them and move on. Kudos to him for doing so.

Still, Pederson’s decision to insert Sudfeld is a questionable one, especially given the score and time of game. Look, it’s his prerogative and his team, so he can do whatever he pleases. If it ends up costing him his job, he has to live with that.

But having a guy like Kelce come to his defense, who’s so respected by his teammates and the entire city from his time with the Eagles’ organization, is a huge endorsement for Pederson, and, if totally true, sort of quashes the idea that Philly was tanking.