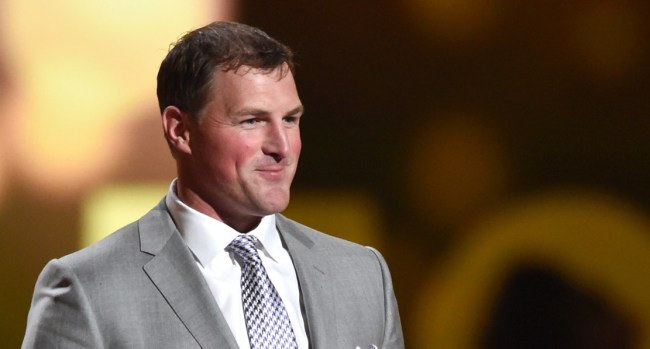 Jason Witten is following in the footsteps of his former Dallas Cowboys teammate Tony Romo by jumping into the broadcast booth this season. And much like Romo, Witten’s new NFL broadcasting gig is a pretty high profile one was he will be working alongside Joe Tessitore and Booger McFarland on Monday Night Football.

Also like his former quarterback, Witten makes his broadcasting debut this year as a complete rookie to the TV game. However, unlike Romo, Witten has not been a whiz at broadcasting right out of the gate.

In fact, as evidenced by Witten’s performance during Monday’s preseason broadcast of the Colts-Ravens game, he has quite a lot of work to do. Something that the ever-critical internet certainly noticed.

Uhh, he didn't do any of that stuff you just said, Jason Witten pic.twitter.com/gkxfAtsCJE

As you can see in the video above, unlike Romo, who has an uncanny ability to predict what play is going to take place, Witten couldn’t even get a play that ALREADY HAPPENED correct in his analysis.

Granted, it is only the preseason so Witten still has a little time to work out the kinks (though his cohort Booger McFarland seems already in top form), but until he does he might want to stay off social media.

jason witten is not great at this

I’ve been watching the MNF game tonight just to get a feel for the new booth.

Watching Jason Witten talk on MNF makes me cringe, he doesn’t look at the camera ever…. he just talks to the other guy never looking anywhere else 😑🙄

Is Jason Witten reading from cue cards??? almost looks like it

Jason Witten is a terrible play by play announcer

Hey @espn can you tell @JasonWitten to look at the camera and not stare into the other commentators eyes.

Booger McFarland is the best thing about the reconfigured MNF. Why is he not in the booth?

Witten is getting replaced by Booger next year. This broadcast is painful.