Jaxson Dart Has Officially Committed And Enrolled At His Next School 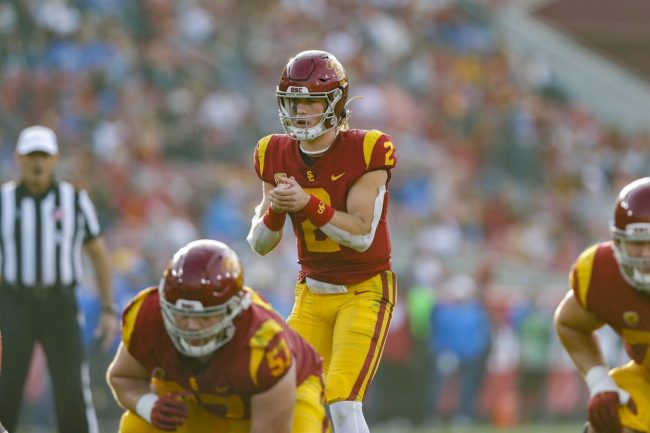 Jaxson Dart watch has come to a close. The former USC quarterback, who announced that he was entering the transfer portal on January 10th, is headed to play for Lane Kiffin at Ole Miss.

As of Thursday afternoon, sources indicated that Dart had applied and was accepted to the University of Mississippi. And then, on Thursday evening, his student email appeared as valid.

Jaxson Dart is officially enrolled as a student at the University of Mississippi pic.twitter.com/IVUasoemMf

Since the moment that Dart entered the transfer portal, the expectation was that he would be the next quarterback to wear powder blue in Oxford.

From the beginning, both he and former USC tight end Michael Trigg were expected to be a package deal after entering the transfer portal together. Ole Miss’ passing game coordinator and tight ends coach John David Baker previously served in a similar role at USC and was integral in both Trigg and Dart’s initial recruitment to Los Angeles out of high school.

And now, both of them will begin class at Ole Miss on Monday.

(Find a full breakdown on both players here.)

Jaxson Dart and Michael Trigg will both be Rebels in 2022.

After getting into the portal, Dart and Trigg were deciding between Ole Miss and Oklahoma. The two visited Norman on January 15th, and then flew south the next day.

While taking their official visit to Mississippi, the duo iciest recruiting photos of all-time with Lane Kiffin and his Aston Martin. At that point, per everyone I had spoken to, it was a done deal.

Despite the understanding that Dart and Trigg had decided together to play for the Rebels, the saga continued. They each played some games on social media, but it ended up being significantly in their favor.

Over the course of just a few weeks, Dart’s monetary value in terms of NIL skyrocketed as he gained followers across all social media platforms. It will only continue to grow as Rebel nation his the follow button whenever his announcement is made official.

With the addition of Dart and Trigg, Ole Miss becomes an immediate contender.

Finding someone to replace Matt Corral at quarterback was going to be a challenge. Dart, at 6-foot-3, 215 pounds, does exactly that.

He has a strong lower body and surprisingly nimble feet for his size that allow him to run a defender over or juke him out of his shoes. Just take your pick.

Although his 2021 season at USC was marred by injury, opt-outs and transfers, Dart still put up some big numbers on the collegiate level. He certainly looked the part and will be a perfect fit with a massive ceiling in Ole Miss’ RPO offense.

As for Trigg, he stands 6-foot-4, 245 and still, somehow, can keep pace with most wide receivers. He is a BEAST.

Ole Miss lacked a true tight end target in 2021 and it showed, despite reaching a Sugar Bowl.

This play is pretty much everything you need to know about Michael Trigg:

With the two offensive additions at the buzzer, Ole Miss’ 2022 transfer portal class sits comfortably among the top three. It also makes the Rebels’ recruiting class amongst the best in school history, which is a debate that can be heard here.

Lane Kiffin got his guy at quarterback and added a bonafide stud at tight end along with him. There was no way that he was breaking out the Aston Martin for two guys he didn’t know that he was going to get. Stay tuned for both Dart and Trigg to post on social media as late as Monday when they both go to class for the first time at Ole Miss.