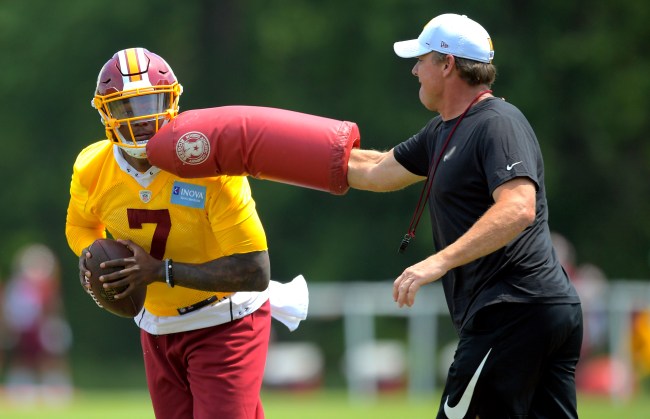 Washington [redacted] quarterback Dwayne Haskins had a pretty rough rookie year in the NFL in 2019, going just 2-5 as the team’s starter and completing just 58.6 percent of his passes.

Then, as if being a rookie QB in the NFL isn’t hard enough, Haskins had to deal with fans losing their minds over him wearing Joe Theismann’s number 7, got publicly criticized by the same Theismann for taking selfies on the sidelines during a game, was caught pleading with his linemen on the sidelines to do… something, and basically having a head coach in Jay Gruden who by every indication had zero desire to have Haskins as his quarterback or was in any way interested in seeing him succeed in the role.

As is almost always the case in pro sports, Gruden, the coach, was dismissed after an 0-5 start last season (and didn’t even seem too upset about it), while Haskins remains, looking much more lean as he preps for season number two under center in Washington.

To illustrate just how tough it was for Haskins during his rookie season under Gruden, Quincy Avery, Haskins’ quarterbacks coach in 2019, spoke to the Ryen Russillo Show podcast about how much Haskins’ rookie season was all but sabotaged from the start.

“Dwayne went through so much more than someone should have to have put on their shoulders as a rookie quarterback,” explained Avery.

“You go in there and the head coach makes it known that he doesn’t like you and makes it as hard as possible for you to be the guy, and then you’ve got… It’s not like a situation where you’ve got a quarterback who just wants to help him be the guy.”

“He didn’t go to the Washington organization and have Case [Keenum] and all of those guys say ‘Hey let’s help make you the starting quarterback.’ He was kind of on his own. It was him and the OC, Kevin O’Connell, were trying to figure it out, all while the head coach says a lot of nasty stuff about you, not only in the media, but also to the team.

“And [Dwayne] was trying to learn how to be a starting quarterback. The responsibility level is so much more different than anything I think people can imagine, and you’re doing that at 21-years-old, leading a billion dollar franchise. It’s a lot to put on your shoulders. And I’m so excited to see the way he’s bounced back this offseason.”

All that being said, there is still no guarantee that Haskins will be the starter when Washington begins its season on September 13th against the Eagles.

New coach Ron Rivera still has Alex Smith on the comeback trail and who will be a $20.3 million salary cap liability this season whether he takes a snap or not. Plus, Rivera brought one of his former QBs in Carolina, Kyle Allen, who at times in 2019 looked like he had potential, with him to D.C.