Jay Williams Offers Up Wild Reason Why Coach K Could Cancel His Retirement, Return To Duke 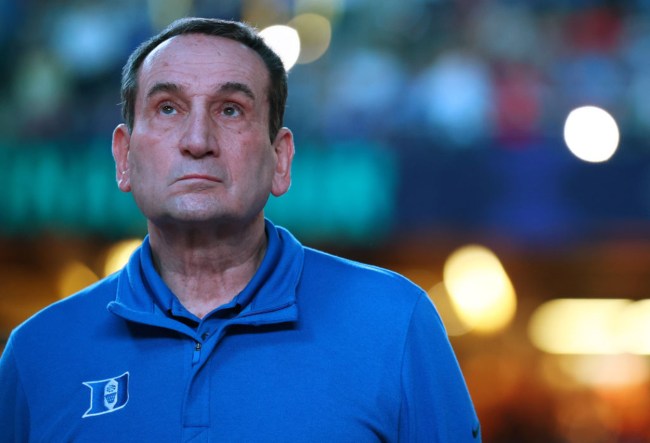 After a farewell tour unlike anyone’s ever seen in college basketball, Mike Krzyzewski has retired after 42 years as Duke’s head coach.

Retirement was Coach K’s plan all along following the season, but plenty of folks out there, me included, won’t believe it until Duke opens next season with Jon Scheyer as its new head coach.

It’s not far-fetched to think Coach K could be having cold feet as he steps into retirement. He lost his final home game to North Carolina, then the Tar Heels beat his Blue Devils in the Final Four to really throw salt into the wound. Krzyzewski’s retirement plan most definitely didn’t have “losing to North Carolina in the Final Four” written on it.

Jay Williams, who played for Coach K at Duke, seems to think that there’s a chance his former coach decided to come back for one more season. It has nothing to do with Krzyzewski seeking revenge against UNC or winning what would be his sixth national title. Instead, it has everything to do with recruiting.

Assistant coach Nolan Smith left Duke to take a position at Louisville, which Williams believes could hurt the Blue Devils’ chances to have the top recruiting class in the country.

“Here’s why I give it (Coach K returning) a legit chance, because if you’re Nolan Smith, and you have a great relationship with all these players, you’re in the conference, man. You’re at Louisville,” Williams explained on Tuesday’s Keyshawn, JWill, And Max.

“It turns into recruiting battles, man, and it weakens your hold on the No. 1 class. So, if you’re Coach K, how do you strengthen that hold? By coming back.”

So, JWill thinks Coach K could return to Duke because he won’t like the fact a number other than ‘1’ could be next to the Blue Devils’ recruiting class on a few recruiting websites?

That seems absolutely ridiculous, which honestly probably means there’s some truth behind it seeing as how Duke and Coach K most definitely operate differently.