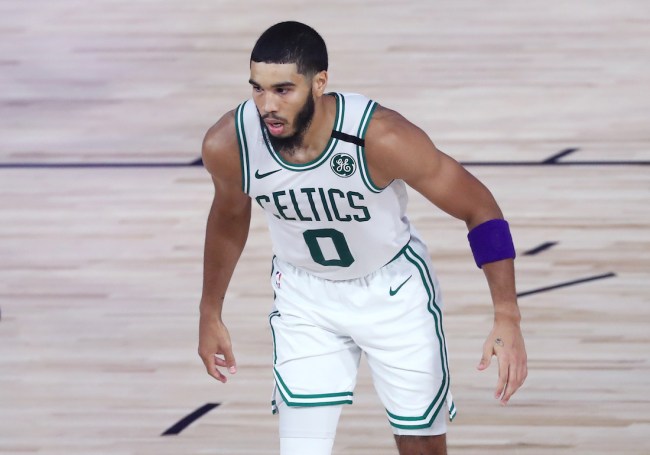 Over the past few years, Jayson Tatum has gone from a young prodigy to an absolute superstar, with the Boston Celtics’ forward beginning to show why he’s viewed as the face of the franchise. After being selected No. 3 overall by the iconic team in the 2017 NBA Draft, Tatum has helped guide the Celtics deep into the NBA Playoffs, while putting up averages of 19.4 points, 6.3 rebounds and 2.7 assists per game during his four-year career.

While those are impressive numbers for a guy who’s still just 23 years old, until Tatum leads Boston back to the Promised Land — AKA an NBA title — he’ll continue to be viewed as an All-Star caliber player but not quite a superstar. That’s how it goes these days, with pundits having a certain threshold that a player has to cross before being put into the upper echelon of stars.

One player who understood this and lived through it himself was Kobe Bryant, who openly admitted before his tragic death that he knew how important it was to win an NBA championship without Shaquille O’Neal by his side. It was about respect. It was about proving himself. It was about sacrifice in order to be looked at as one of the league’s best players.

Given Jayson Tatum’s relationship with Kobe — with the Celtics star viewing Bryant as both an older brother and mentor — the former would often get advice from the five-time champion. And during a recent appearance on the Beyond The Press podcast, Tatum shared some of the things The Black Mamba would do to mentally push him to try and become a superstar.

“Everyone wants to win,” Tatum said. “I want to be a champion. I want to be an MVP and want to be one of the greatest to ever play — Hall of Fame. That’s something I’m actively working on.”

I absolutely love this story from Jayson Tatum. Not only does it give a little insight for fans to see how great he wants to become, but it’s another incredible story involving Kobe Bryant — and there are many of them. It also shows how Bryant’s ruthless competitiveness adapted after leaving the NBA, as he began to groom the next generation of young players.

Now, look, nobody’s suggesting that Tatum will become the next Bryant, but he still has another decade-plus to at least prove he can win championships like the Lakers legend did. Kobe Bryant’s work ethic was absolutely legendary, and that type of dedication can’t just be taught. But Kobe tried to at least get Tatum to think differently, while planting the seed in his head about how he can work towards being an all-time great.

Tatum knows he’ll be measured by how many rings he has by the time his career is over. After two All-Star appearances, it’s clear he wants more for both himself and his Celtics. Thanks to some inspiration from Bryant, maybe he’ll reach that full potential and, ultimately, end up being viewed as one of the best NBA players ever by the time he’s done.