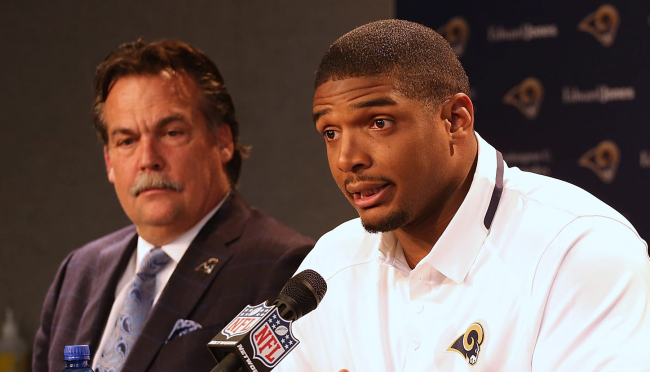 Among the many disturbing things to come out of the leaked Washington Football Team emails involving Jon Gruden was the now former Raiders head coach’s obvious disdain for anyone that is homosexual.

In that email, Gruden wrote that Goodell should not have pressured Jeff Fisher to draft “queers” – a reference to the Rams taking Sam, who played his college football at the University of Missouri.

Tuesday night, Fisher responded to Gruden’s email claims regarding the Rams’ selection of Michael Sam in 2014.

“Michael Sam was the SEC Co-Defensive Player of the Year in 2013, and we selected him in the 2014 NFL Draft based on his defensive production and pass rushing skill set on the field,” Fisher said in a statement shared on social media.

“As a head coach for over 20 years, we drafted or didn’t draft, players based on a variety of qualities. Their sexual orientation would never – and should never – play a part in the decision-making process.

“I continue to support Michael, and his decision to come out as the first daft eligible openly gay player in the league. It took courage to serve as a role model for those competitive football players who may also happen to be gay.

“Lastly, the NFL never encouraged or discouraged me regarding the selection of a potential prospect.”

Jumping on Twitter to clarify the below.
Hope everyone is doing good.😎👇🏽 pic.twitter.com/4bqFDUYSR6

Many NFL fans, including the former CEO of the Raiders, Amy Trask, appreciated what Fisher had to say.

That there was a need for you to address this is both wrong and sad, as you of course know - that you did address this is important and appreciated by many, including me - thank you Jeff - and hi.

As a gay football fan who teared up at the moment he was drafted, I sincerely appreciate this statement. Sad it had to be made. But I’m glad you saw fit to clear this particular air.

It was a ludicrous suggestion in the first place but good on you for setting the story straight. Not for the first time either.

Not everyone was buying it though.

Jon Gruden and Bruce Allen were obviously both highly connected in the NFL so where did the rumor come from? Usually, there’s some truth to a rumor so that it’s believable.

The fact that you cut him in favor of undrafted player and Sam never played an NFL game tells me you never actually intended to roster him. He was always undersized, lacking burst needed to be an edge rusher, and his college stats were result of a scheme not ability.

Sam, who ended up never playing a down in a regular season NFL game, has not directly commented on Gruden’s email since the leak, but has subtly made his thoughts on the matter pretty well known.

@NFL so are you guys hiring? 🤔

I truly believe this is the perfect time to throw this out to the universe. If anyone want to know how I am doing, I am looking for a career in a few industries. DM me and we can talk further. “I hope someone makes you smile today.” Love you! 🌺💜