Jerry Jones Is ‘Very Intrigued’ By Making Lincoln Riley The Cowboys’ Next Head Coach, According To Report 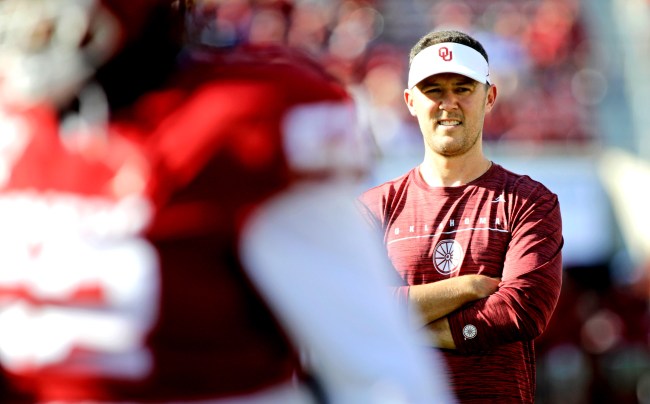 When Jerry Jones refused to extend Jason Garrett’s contract, knowing full well that he would become a free agent coach after this season, the writing was pretty much on the wall: Win, make the playoffs, make it past the first round – preferably to the Super Bowl, or Jones was going to make a move.

Back in January, Jones made the laughable remark, “If Jason Garrett had been out on the market two weeks ago, he would’ve had five offers for head coaching. I know that. And so you’ve got to look at what your alternative is.”

Jones also pointed out at the time, “We’ve got a very young team. … We’ve got players we’ve got going in a direction, you make changes and you’re going to change direction,” Jones continued. “And you may not know … what that coach has in mind relative to your personnel. … Making a change each year is tough, I’ve done that. And I’ve been there. And I know the price you pay.”

Fast forward to this week, following the Cowboys’ third straight loss after starting out the season 3-0, and Jason Garrett’s hold on the Dallas Cowboys’ head coaching job appears to be tenuous at best.

#Cowboys’ Jerry Jones won’t publicly review Jason Garrett’s performance each week, but don’t kid yourself: He’s at the final crossroads with Garrett. This is the third straight 3-3 start in Dallas. This entire staff is coaching for a job the next 10 games. https://t.co/rozKdyZw1t

Fans want Garrett to be fired, right now. Players appear to be starting to tune him out. Garrett reportedly has a terrible reputation among potential free agents. And worst of all, he has just two playoff wins in 8-plus seasons as the Cowboys’ head coach. It’s not looking good for him these days.

Now comes a report from Jason La Canfora of CBS Sports that Jerry Jones already has a wandering eye, and it may be settling on current University of Oklahoma head coach Lincoln Riley.

Several sources indicated Jones, if he does make a coaching change, is very intrigued by Oklahoma head coach Lincoln Riley. Several league sources said Riley would be willing to seriously consider the right NFL openings in 2020, and, obviously, the Cowboys’ head coaching job is one of the most high-profile and coveted in all of sports.

La Canfora also mentioned the fact that Garrett is no longer calling plays on offense, Kellen Moore is, which could make Riley’s transition to the pro game easier.

Considering Jones’ love of thinking outside the box, his fascination with University of Oklahoma coaches, and the fact that he is well aware of how young his team is, the idea of hiring the 36-year-old Riley to replace Garrett might be too tempting for him to pass up.

That’s assuming he can’t steal Sean Payton away from the Saints, that is. After all, Payton, the Cowboys’ assistant head coach and quarterbacks coach from 2003 to 2005, did once say, “You coach [the Cowboys], they know your name in China. Here, I coach the Saints and they know my name in Tampa, Florida, and in Atlanta, Georgia.”