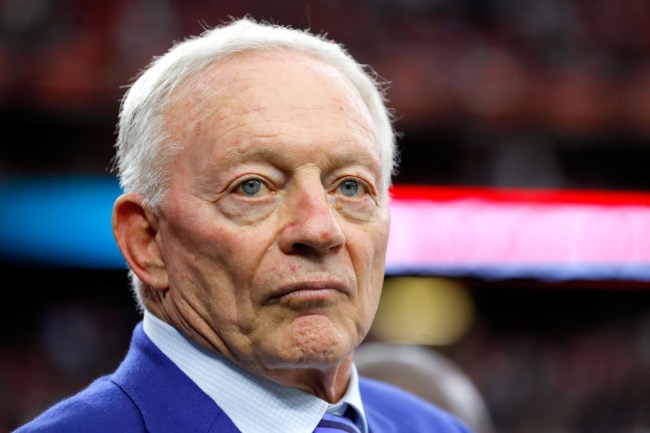 The Dallas Cowboys (at least temporarily) managed to get out of the tornado of suck they were stuck in over the past month or so when they got a much-needed win against the Rams on Sunday thanks at least in some part to a fiery speech the much-beleaguered Jason Garrett delivered to the team ahead of the showdown.

It was a statement win for a squad that’s been dealing with an impressive amount of drama in recent weeks thanks to the rumors surrounding Garrett’s job security that have been fueled by a steady stream of comments from Jerry Jones concerning his coaching abilities.

The Cowboys owner took his first shot at Garrett after the team dropped a game to the Patriots and has continued to pop off rounds since then much to the chagrin of Troy Aikman, who hasn’t been shy about laying into Jones for his contributions to Dallas’ current woes.

The former quarterback first voiced his concerned about how the organization is structured last year and has continued to paint Jones as the scapegoat by suggesting the Cowboys are screwed unless he agrees to cede some of the control he has over daily operations.

Now, it appears Jones has caught wind of Aikman’s criticism, as he addressed it during one of his regular appearances on 105.3 The Fan and implied the man that helped bring him three Super Bowls wouldn’t do things much differently if he was in his shoes:

“Now I would wager that if he [gave everything] to buy the team, he would do it exactly like I do it. I would wager that. Because you just want to, ultimately, with that much on the line and that much at stake, you want to break any ties and make the calls…

It’s a misnomer to think I just throw darts and just say, ‘We’ll do it this way, that way.’ I’ve never done that. But as I’ve said many times, I’ve never not made the ultimate decision.”

When you drop $140 million to buy a football team like Jones did, I can understand wanting to have as much control as possible over things. With that said, based on how things have gone over the past couple of decades, he might want to think about delegating a bit if he wants to bring the Lombardi Trophy back to Dallas.