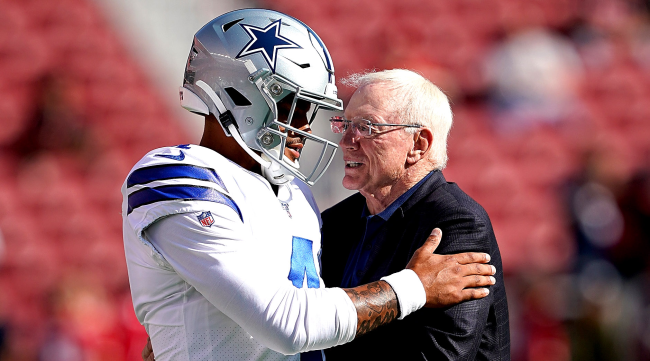 God love Jerry Jones. Say what you will about the Dallas Cowboys, love them or hate them, but you can never say they are boring. That is, in large part, due to the fact that Jerry Jones is the team’s owner and general manager.

What other owner of a professional sports franchise goes on the radio each week and tells the show’s host to “just shut up” and curses on the air when he doesn’t like the line of questioning?

No other owner tells stories about owls and chickens hooking up on his father’s farm, describes contract negotations as “you’re spurting blood” or compares hiring his head coach to that time his sister got divorced.

On Wednesday, Jerry was back at it with another unusual analogy.

When discussing how much players like Dak Prescott have to go through just to play the game.

“I’d kill somebody if they put me through what guys go through in the draft when they look at their backgrounds & check every neighbor, every friend they ever had,” Jones said at a press conference on Wednesday, reports The Athletic’s Jon Machota. “I’d shoot somebody if they did that (to) me. Dak gets that kind of scrutiny.”

Related: A Surprisingly Large Number Of Cowboys Fans Are Not Happy With Dak Prescott’s New Contract

Considering Prescott was drafted by the Cowboys in the fourth round of the 2016 NFL Draft he probably didn’t have to go through near the gauntlet that first round picks do. However, becoming the starting quarterback in Dallas definitely does come with more scutiny than most jobs in the NFL.

That much was clear based on the numerous Twitter reactions to Jerry’s bizarre statement.

JJ has obviously reached the IDGAF stage of his life.

My reaction to this was pic.twitter.com/7ILTjeXz6E

No matter what ppl think of ole Jerruh, he's 1 of a kind and entertaining as hell.