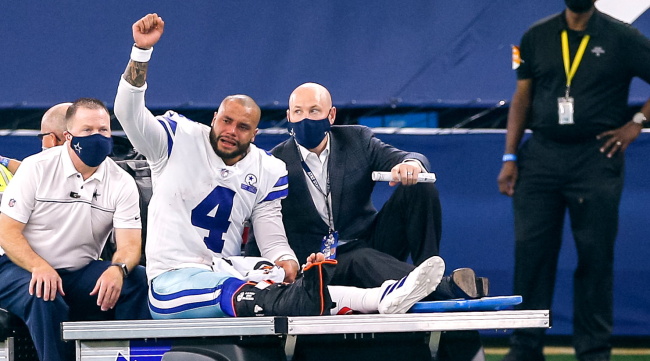 One of the feelgood stories of the week in the world of sports was Dak Prescott, after suffering a very nasty leg injury early in the NFL season, signing what many fans saw as a well-deserved monster new contract with the Dallas Cowboys.

Cowboys great Michael Irvin was so happy with Prescott’s new deal that he claimed Dak is the closest thing to Tom Brady in the NFL. No, really. He said that.

“From the standpoint of him, one of the real easy decisions that I’ve had to make in my time with the Dallas Cowboys was to have Dak Prescott as the future regarding the quarterback position of the Dallas Cowboys,” owner Jerry Jones said about the contract during a news conference Wednesday.

“I thought about jogging out here. I’m healthy. I’m getting close. I’ll be ready when it matters,” Prescott said during the presser, then compared himself favorably to Alex Smith.

Not counted among those who were glad to see Dak Prescott sign the largest deal in NFL history (in terms of guaranteed money) with a four-year, $160 million contract extension (where he will receive $75 million in year one), apparently, are a whole big bunch of Dallas Cowboys fans.

There really is no pleasing those people, is there?

When the Dallas Cowboys Twitter account asked on Tuesday how the team’s fans were feeling, they obviously were expecting all of them to be thrilled with Prescott signing his contract extension, and not, well, to get bombarded with these negative reactions and more.

#CowboysNation, how y’all feeling this morning?!

Meh...paid a slightly above avg qb top money and still don’t have a defense and now have no money to pay for a defense. Only shot they have is to draft all defense and pray they all hit.

lol we don’t have money to pay anyone it’s locked up in Zeke, DLaw, Dak and all the other overpaid players on our team who can’t win a championship

JJ just gave superstar $ to an above avg QB when his injury recovery is unknown. High-ankle sprains and breaks have derailed the mechanics of QBs plenty of times. Should’ve spent the $$$ on building the D

Say it... no one knows if he can even run out of the pocket and when he points that foot re-injury bound here we come

Of course, Philadelphia Eagles fan chimed in claiming to be very happy to see it.

As a eagles fan I love that 75+% of Dallas salary cap is on 7 players...I know we are taking a hit on wentz money this year and that sucks but Dallas is so poorly managed it's insane..zek not even that good and dlaw is trash..I love this dumpster fire of a team Cowboys