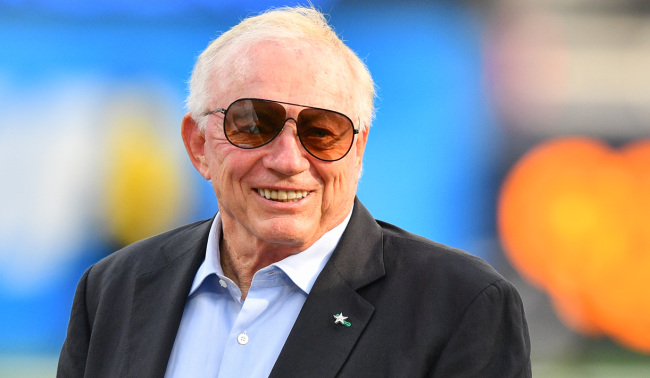 79 year-old Jerry Jones, always a man of the people, tried to take a selfie with some fans at MetLife Stadium Monday night and the struggle was very, very real.

The fans, seated in the front row, somehow convinced the Dallas Cowboys owner to take their phone and attempt to shoot a photo. Unfortunately, with them being seated significantly higher off the ground than Jones it appeared to be difficult for Jerry to figure out how to take the pic at the odd angle.

Eventually some guy in a suit came over to give Jerry a hand and the fans got their photo (we think).

Good ole Jer looked like he is as familiar with how to take a selfie using a cell phone as Bill Belichick is with stuff like SnapFace, InstantChat, MyFace, Yearbook, and fantasy football.

NFL fans, as they always do when it comes to Jerry Jones, had a lot of fun watching him struggle

“Owns the richest team in the world and doesn’t know how to take a photo,” someone commented on Twitter.

“One would think he has a guy for that,” wrote another. (Maybe that was the guy in the suit?)

“Jerry Jones look like he call smart phones ‘doohickeys,'” someone else joked.

“This is why the Cowboys are poverty,” another fan wrote.

“The franchise is in good hands,” sneered another.

"Dude! I have a selfie with Jerry fcking Jones"!!! pic.twitter.com/o8HpCrDmtv

“Our doddering oligarchs are so cute,” someone else tweeted.

Rest of the NFL*

It is definitely going to be a very sad day when Jerry Jones and Bill Belichick are no longer around to provide their special brand of unintentional entertainment for NFL fans.