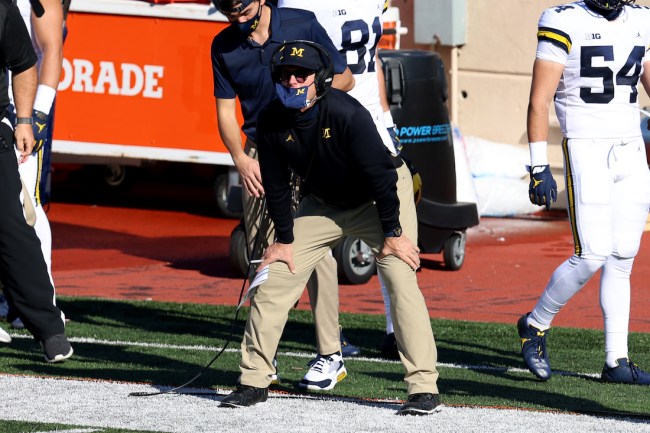 You’ve got to hand it to Jim Harbaugh, guys, ’cause the guy hasn’t particularly been a great head coach at his alma mater, Michigan, but the 57-year-old sure has marketed himself amazingly in order to rake in a boatload of cash during his time stalking the sidelines in Ann Arbor. In addition to the recent extension Harbaugh signed in early 2021 to continue to lead the Wolverines into 2025, the dude has appeared in a number of different commercials, which, as one would expect, have paid him handsomely.

Now we all know that Jim Harbaugh has this whole khakis look down pat, with the coach making it his signature style that rivals the look of icons like Steve Jobs’ turtleneck. And, because Harbaugh has done a tremendous job showing off his dad look, naturally, a brand came calling to feature him in an ad a couple years ago. That brand? Downy. The amount Harbaugh got paid? $250,000.

Yep, you read that correctly, guys. According to Sportico‘s Daniel Libit — who used FOIA requests to discover times that college coaches earned “outside income” — the Michigan Wolverines head coach collected a quarter of a million bucks for the cheesy ad. Take a look below at the brief appearance from Harbaugh, who really gamed the system by scooping up so much for this little amount of work.

For Jim Harbaugh, earning $250,000 for a couple lines in a Downy commercial is awesome for him. But imagine being a college football player who literally puts his life at risk every single play and doesn’t earn a dime for doing it. That may be a little bit of an extraordinary statement, but it’s true — because there’s no monetary value tied to these kids should they (unfortunately) sustain a serious injury. It’s why the NIL debate in college sports continues to rage on.

Meanwhile, Harbaugh and coaches like him at major programs are just making money left and right, with some even getting paid millions to leave a program — like Gus Malzahn did at Auburn. It’s a messed up system, so here’s to hoping things change soon. But, for now, it’s time to raise a glass to all the dads out there who love rockin’ khakis with some Nike Air Monarchs. It’s quite the weekend look.