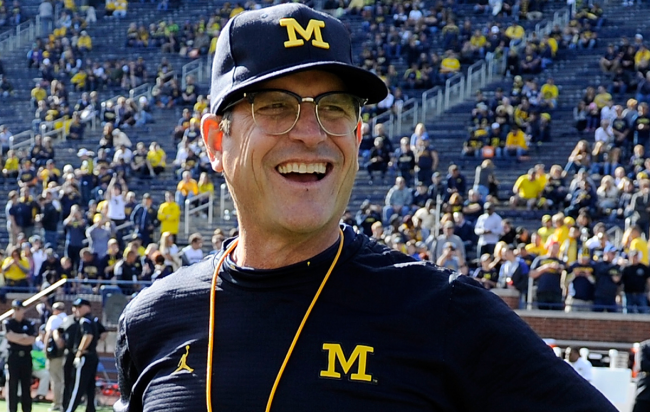 Being the most eccentric coach in college football is sort of like being the most deranged inmate at Arkham Asylum, and while there’s no shortage of peculiar personalities to pick from when it comes to the guys patrolling the sidelines, you’d be hard-pressed to name a weirder dude than Jim Harbaugh.

During his time as the man at the helm at Michigan, Jim Harbaugh has repeatedly shown that he’s someone who marches to the beat of his own drum—one that he bangs on like a toddler using a wooden spoon to jam on some pots and pans while sitting on the kitchen floor. Wolverines fans might not love how he’s fared against Ohio State over the course of his tenure, but I don’t see how you can’t love a man whose love of khakis puts Jake from State Farm to shame and loves drinking milk as much as he hates eating chicken because it’s a “nervous bird.”

There were plenty of hints that Harbaugh was a fairly quirky guy before he arrived in Ann Arbor, but his return to the NCAA has provided us with a wealth of evidence to prove that’s the case thanks in no small part to the many, many stories concerning his fairly unconventional recruitment tactics. Over the years, he’s harnessed some interesting strategies in an attempt to lure athletes to Michigan, including climbing a tree, inviting himself to a sleepover at a high schooler’s house, and showing up in cleats when he visited another’s (which ultimately led to the player deciding to pursue other options.)

Earlier this week, we got another fantastic anecdote courtesy of comedian Randy Sklar, who recounted the time he was randomly recruited by Harbaugh to write some jokes the coach could use while courting prospective Wolverines.

"He texted me one time, 'You got any good jokes?'"

Randy @SklarBrothers shares the story of the time @CoachJim4UM reached out to him in search of a joke to tell.

When I first stumbled upon this story, I couldn’t help but think of the scene from Life’s Too Short where Liam Neeson decides he wants to dabble in comedy.

It appears Sklar’s exchange with Harbaugh was decidedly less problematic, but it’s still pretty damn funny, as the comedian recounted what went down, saying:

And he did, it was so great. He’s like, ‘I’m about to talk to this running back from Cleveland, or Cincinnati from 2022. I’m going to use one of these jokes.’ And he did. It was great.”