Jim Harbaugh Pulled The Classiest Move By Using His $1.5 Million Bonus To Help Out University Employees 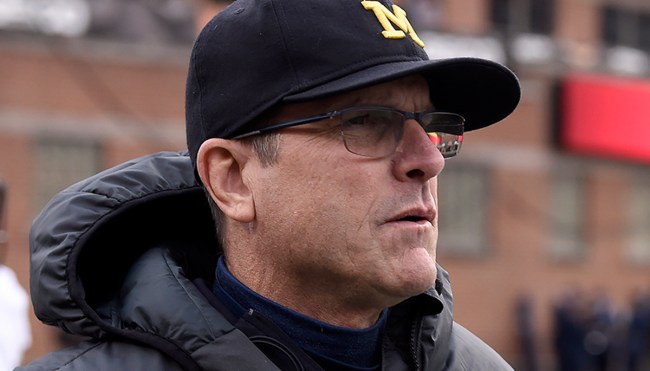 Over the years, Jim Harbaugh has been engaged in a neck-and-neck battle with Mike Leach for the title of The Most Entertaining Coach in College Football, as the man who patrols the sidelines at the University of Michigan is one of the most eccentric characters you’ll ever encounter on or off of the gridiron.

It’s easy to make fun of the khaki-loving coach who’s at the center of some borderline unbelievable stories, whether we’re talking about the recruiting visit where he wore cleats inside a player’s house or the time he padded his laser tag stats by spending an entire round hunting the 10-year-old kid he viewed as easy prey.

Now, I’m sure some fans of THE Ohio State University would disagree with the assertion that Harbaugh is a pretty hard guy to hate. However, he’s always come off as a pretty good (albeit incredibly quirky dude)—and nothing highlights that quite like what he did after taking home a massive chunk of bonus money following Michigan’s 12-2 campaign last year.

Harbaugh earned a base salary of $4 million in 2021 but also received more than $1.5 million in bonuses after the Wolverines finished at the top of the Big Ten East, won the conference championship in a rout over Iowa, and secured a spot in the College Football Playoff (where the team’s season would come to an end after losing to Georgia).

In November, Harbaugh announced his plan to use those potential bonuses to help out the employees in the University of Michigan athletic department who dealt with salary freezes and wage cuts stemming from the pandemic, and according to USA Today, he’s a man of his word.

The outlet reports records it obtained show a total of 210 U of M employees received a little over $1.5 million after payments began to hit their bank accounts in January. The exact amounts varied, but reportedly ranged from “just less than $1,000 to  “more than 30 five-figure amounts, and one that reached six figures.”