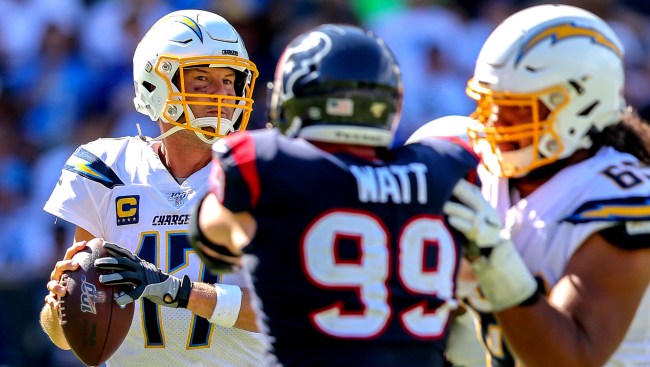 It was revealed on Wednesday that 17-year NFL veteran quarterback Philip Rivers is hanging up his helmet and retiring after spending 16 seasons with the Chargers and one with the Colts.

Rivers finishes his excellent career with 63,440 yards passing (fifth all time), 421 touchdowns (fifth all time), and a record of 134-106 as a starter (fourth most regular season wins by a starting QB in NFL history).

To say he is a shoo-in for the Hall of Fame would be an understatement.

While he went just 5-7 in the playoffs, only reaching the AFC Championship once (a 21-12 loss to the Patriots in 2007), Rivers was still one of the smartest players on the field during any game he played.

A perfect example of Rivers’ football intelligence came to light on Wednesday when Houston Texans star JJ Watt tweeted, “I’ll never forget lining up for a play and Phil pointing to one of our linebackers and telling him he was lined up wrong based off the blitz we were about to run and being 100% correct about it haha.

“One of the smartest I’ve ever played against and a hell of a competitor.”

I’ll never forget lining up for a play and Phil pointing to one of our linebackers and telling him he was lined up wrong based off the blitz we were about to run and being 100% correct about it haha.

One of the smartest I’ve ever played against and a hell of a competitor. https://t.co/1AZxyvDafu

Watt later corrected himself, so as not to offend Rivers – probably the greatest clean trash talker the NFL has ever seen.

Watt was far from the only current and former NFL player to express his admiration for Rivers in the wake of his retirement announcement.

Tough to put into words all this dude means to me. An all time teammate, competitor, leader and friend. Thank you for everything you’ve done for me. You are freaking beast. NUNC COEPI #horsemess #thatsmyquarterback https://t.co/zLVbDPJboe

Congratulations on a great career to my brother Phil, you’ll go down as one of the best. I’ll be at your HOF speech ⚡️⚡️⚡️ pic.twitter.com/1Fx0ymgZer

Congrats hawce! Almost a little emotional seeing it actually happening. Sad ur done playing but way more excited for u to see this side of the nfl! With u being one of the best husbands,dads,and friends i know this will be the perfect decision. Ur the best brother! Love u https://t.co/iMgqocFMPZ

Philip, congrats on a Hall of Fame career! Thanks for your example as a QB, a team leader, a Dad, and a man of faith. So fun to watch

Can’t stand to see Philip Rivers retire. I know cornerbacks won’t miss him lol. It was an honor to compete against a guy like him twice a yr. One of the smartest, most competitive, and fearless players to ever play the game.

Absolutely loved every single thing about Philip Rivers and his game. The leadership and toughness were at the absolute highest. Best QB I ever saw throwing with defenders right in his face. Love that dude-HOFer!!!!!👏👏👏

This is my favorite Philip Rivers moment pic.twitter.com/csuOKU05jE