Joe Burrow’s Parents Aren’t Sure If All NFL Fans Are Degenerate Trash-Talkers, Or If It’s Just Aggro Browns Fans 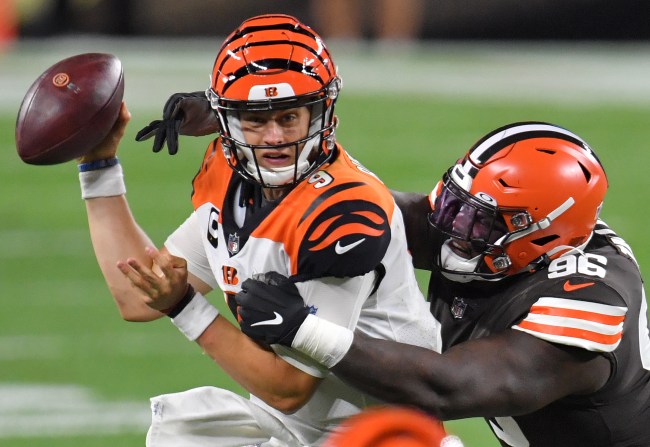 Joe Burrow’s been absolutely lighting it up so far in the NFL, with the No. 1 overall pick nearly leading his Cincinnati Bengals to wins in both Week 1 and Week 2, with the second game (on the road versus the Cleveland Browns), seeing last year’s Heisman Trophy winner throw for over 300 yards and 3 touchdowns. It’s early, but, from what we’ve seen from Burrow so far, the kid sure looks to have a bright future.

Given Burrow’s rise over the past few years from overlooked high school recruit to Ohio State backup to LSU starter to All-World quarterback to the top pick in the 2020 NFL Draft, one would imagine that his parents, Jimmy and Robin, would be used to lots of attention on their son, right? Like, as the quarterback with all the hype, if Joe Burrow’s walking into my team’s stadium, he’s the guy I’m booing and trying to get into his head. However, Mr. and Mrs. Burrow don’t seem to be used to it quite yet — at least not on the NFL level — because they’re confused as to why so many Browns fans talked shit during the Week 2 contest, and aren’t sure if it’s just a Cleveland thing or something they should expect from all NFL fans.

As part of a feature in The Athletic, Joe Burrow’s parents said that, while they weren’t completely harassed by Browns fans, given the fact that they were near enemy territory, they avoided sporting the quarterback’s jersey just to stay safe. That still didn’t stop the “harsh” shit-talking from Cleveland fans though.

“It was a little bit harsh,” she added. “That would be one way to put it. I guess I haven’t been to enough NFL games to know if that’s normal or if that’s just a Browns thing. We experienced it a couple of times in college, but this was just different. That’s OK, though. I’ll have to thicken up my skin a little bit, I guess.”

Sitting in Section 149 in the west end zone (the non-Dawg Pound end zone), Jimmy and Robin were sporting plenty of Bengals gear. But unlike their two seasons watching Joe play for LSU, at home at Tiger Stadium and at other SEC venues, they weren’t wearing replicas of his jersey.

And that was by design.

“We’re kind of waiting a little,” Jimmy said. “We don’t want to get too far out in front of ourselves, advertising that we’re Joe Burrow’s parents. Everybody at LSU knew it no matter what, so you might as well wear the No. 9. But that’s not the case here.”

I’m a lifelong Browns fan, so I could only imagine the type of shit spewing from the mouths of fans towards the Burrow’s during the game. Still, it’s hard to imagine the quarterback’s parents didn’t expect this to happen anytime they go watch their son play. Sure, they weren’t out there advertising the fact that they were Joe Burrow’s parents, but enough people probably know who they are by now. You come into an opposing team’s stadium, there’s going to be some weird shit that happens.

All sports fans are insane, so the Burrow’s should’ve expected something like this happening in Joe’s first road game; which just so happened to come in primetime against a division rival with a rabid (and obscene) fan base. Hell, remember in that 30 for 30 how Christian Laettner‘s younger sisters detailed the amount of verbal abuse they got for being related to the former Duke star? People are mean AF, man — especially when there’s booze and competition going on.

So while Joe Burrow’s parents might have been a little shocked at first from all the shit being talked to them by Browns fans, I’d imagine they should be prepared for what’s to come anytime they take their support on the road. Fair or not, that’s sort of part of the territory with a son who’s a starting quarterback for an NFL team.