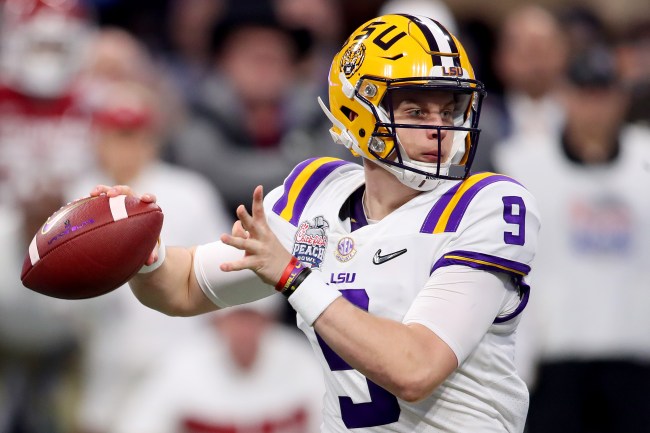 Former LSU Tigers quarterback Joe Burrow has had a year for the ages. After transferring down to the Bayou from Ohio State before the 2018 college football season, the signal-caller went from a possible mid-round NFL draft pick to the No. 1 overall selection by the Cincinnati Bengals, capping an incredible 2019 season that included a Heisman Trophy and national title with top billing in his draft class. His rise truly has been incredible after seeing how he fell out of favor in Columbus.

Although Burrow exceeded expectations in his second season as the starter in Baton Rouge, he didn’t enter campus with a whole lot of fanfare. After all, while the guy seemed to have talent, nobody really ever got a chance to see it, so some of his swagger wasn’t immediately accepted by some of his LSU teammates at first. In fact, according to a recent piece from Brody Miller in The Athletic, it wasn’t until Joe Burrow started a full-fledged fight during a team scrimmage that he really earned the respect of his new locker room.

As the story goes, Burrow’s LSU offense was absolutely chewing up the LSU defense during one of the team scrimmages. Frustrated and a little embarrassed, safety JaCoby Stevens decked the quarterback (even knocking off Burrow’s helmet in the process). The scrappy signal-caller wasn’t about to step down, though, and he went after his teammate to defend himself — which caused an all-out fight. Take a look below at the deeper description.

Before Joe Burrow and LSU won the national title in 2019, the Heisman winning-quarterback was reportedly involved in a brawl during a scrimmage. At the time, Burrow and the offense were dominating the defense and the opposition was not thrilled about the thrashing.

In defiance, safety JaCoby Stevens reportedly came after Burrow “off the edge on a red zone blitz” and took him to the ground. The hit was so hard that a teammate remembers Burrow’s helmet coming off.

Burrow then replied by instantly getting up and approaching Stevens, grabbing his face mask. The entire team then joined in on the brawl, with just Adrian Magee sitting it out for a water break.

“Tory Carter comes in like a heat-seeking missile and takes somebody out, I can’t remember who,” one LSU staff member said.

According to Miller, many players from the 2019 LSU team point to this moment as the time Burrow first earned their respect.

“Joe didn’t back down, and JaCoby, I think, respected him after that,” one person said.

It might not be the most ideal way for a team to build chemistry and trust, but for Joe Burrow and the LSU Tigers, the internal brawl seemed to bring players closer — which led to trust in their new quarterback, who wasn’t about to take shit from anybody. That kind of fight and grit lasted all season long for the Tigers, as they ended up going undefeated at 15-0 and hoisting the College Football Playoff National Championship trophy.