Joel Embiid Yelled ‘Kobe!’ During A Fadeaway To Score His 24th Point While Wearing No. 24 To Honor The Fallen NBA Legend 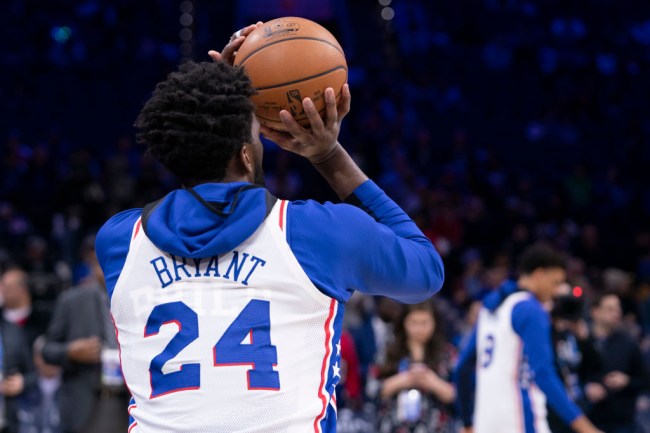 The world has been sadly rocked by the unexpected passing of many iconic athletes over the years but I don’t know if any of those deaths have hit as hard as the sudden loss of Kobe Bryant, who perished in a helicopter crash along with eight other people (including his daughter Gianna) on Sunday.

People around the planet are still processing the shocking news and paying tribute to the legacy the basketball legend left behind, and over the past few days, there has been an outpouring of tributes from the many people who Bryant left a permanent impact on over the course of his tragically short life.

After the tragic news broke, Mark Cuban announced the Mavericks would be retiring the No. 24 jersey to honor Bryant and other players who rocked the two numbers he sported over the course of his career have also changed theirs out of respect (although at least one of them will remember him by keeping his number unchanged).

Bryant left an indelible mark on the NBA and inspired many of the league’s players to follow in his footsteps—including Joel Embiid, who credited the fallen superstar for inspiring him to step onto the basketball court for the first time.

On Tuesday, the 76ers paid tribute to the man who first made a name for himself playing basketball in Philadelphia with a touching pregame ceremony and by putting the No. 33 he wore during his time at Lower Merion High School on the floor at Wells Fargo Center.

Embiid also honored Bryant in his own way by swapping out the No. 21 jersey he’s traditionally worn for Bryant’s No. 24 ahead of what would be a 24-point performance that was capped off by a fadeaway jumper he hit while yelling “KOBE!”—the phrase virtually everyone on the planet has shouted at some point while trying to throw a ball of paper into a trash can across the room.

Joel Embiid wore No. 24 for Kobe tonight and scored 24 points.

Joel Embiid said he yelled out the classic "Kobe" when hitting the fadeaway jumper that got him to 24 points, though he didn't realize it was his 24th point. pic.twitter.com/zQrLYmOmIL