John Harbaugh Quietly Dropped $2,000 To Cover The Tabs Of Fellow Diners At A Restaurant Charity Event 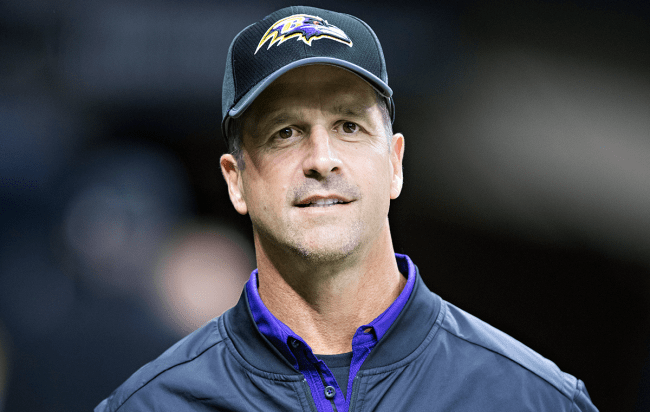 After spending a decade covering sports on the internet, I’ve acquired an almost encyclopedic knowledge of Jim Harbaugh, and if ever I find myself on Jeopardy! tasked with naming his favorite drink (whole milk,) where he buys his trademark khakis (Walmart,) and the one meat he refuses to eat (chicken), I like to think I’d add a solid chunk of change to my total score.

I can’t say I’m as intimately familiar with the older brother of the man at the helm in Ann Arbor, as John Harbaugh seems like a pretty chill dude who probably spent most of his high school experience trying to pretend he wasn’t related to Jim based on his sibling’s tendency to do things that probably resulted in him getting sent to the guidance counselor’s office on more than a few occasions.

The younger Harbaugh’s NFL coaching stint didn’t exactly pan out as he’d hoped, but John has managed to do a pretty damn good job since taking the reins in Baltimore in 2008, where he’s coached the Ravens to the playoffs nine times—including one postseason campaign that saw them take home the Lombardi Trophy.

As a result, it’s safe to assume Harbaugh is viewed pretty fondly by the people of Charm City, and according to TMZ Sports, he’s provided them with another reason to appreciate him based on what went down when he recently stopped by Jimmy’s Famous Seafood for a charity event organized to raise funds for bars and restaurants in the city who’ve been impacted by the pandemic.

On Tuesday, one of his fellow diners tweeted that she was sitting next to Harbaugh before he left only to discover he’d been kind enough to quietly pick up her tab in addition to the bill of everyone else who was there at the time, which the outlet reports ran him around $2,000.

John Harbaugh was just sitting across from my friends and I at @JimmysSeafood we didn’t wanna bug him, he ended up secretly picking up our tab and we wanted to thank him, hopefully he see this! @Ravens (also fangirling hard) 🤍💜

After the story broke, whoever runs the Twitter account for Jimmy’s Famous Seafood acknowledged the kind gesture of a man they seem to appreciate as much as they despise Mike Florio.

As Baltimoreans, we are extremely fortunate to have The Harbaugh Family consistently setting such a fine example. Class, grit, and compassion have always been cherished qualities in Charm City – and Coach Harbs embodies all 3! https://t.co/P7jDBnvj5C