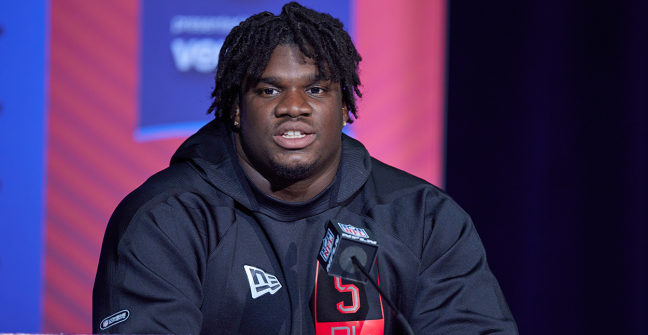 Every year, one player in particular stands out for putting on a freakish performance at the NFL Combine. This year, it is Georgia defensive tackle Jordan Davis.

Davis, who started in all four years with the Bulldogs, had an incredible senior season in 2021. Although his numbers may not jump out off on the page, his stats were strong and he made an even bigger impact as a disruptor.

While offenses had to key on Davis, his teammates around him were less covered and able to wreak havoc. In turn, he won the Outland Trophy, given to college football’s best interior lineman and the Bednarik Award, given to the best defensive player in the sport.

Now, after winning a College Football Playoff National Championship, Davis is projected to hear his name called in the first round of the NFL Draft. He is absolutely massive, freakishly quick, and even scored the biggest big man touchdown in college football history last season.

Davis is currently in Indianapolis for the NFL Scouting Combine and showed scouts why they should draft him on Saturday. His unbelievable performance turned the head of every single person around the world.

When you put Davis’ numbers in perspective, they are even more insane.

For starters, Davis measured-in at 6’6 3/8″ and 341 pounds. He is taller than tight end Rob Gronkowski and heavier 18-year offensive tackle Jason Peters.

From there, Davis ran a 4.78-second 40-yard dash. That is faster than quarterback Patrick Mahomes.

In the 10-yard split drill, Davis finished with a time of 1.68 seconds. That is quicker than wide receiver Jarvis Landry.

Davis also recorded a 32-inch vertical. That is more explosive than running back Jamaal Charles when he went through the Combine in 2008.

And to make things even more impressive, Davis leaped 10 feet, three inches in the broad jump. That is three inches longer than tight end Jimmy Graham.

For someone of Davis’ size, the performance he notched on Saturday was one of the most unbelievably athletic things that you will ever see. When you compare his results to former and current NFL players at non-defensive tackle positions, it’s mind-blowing.