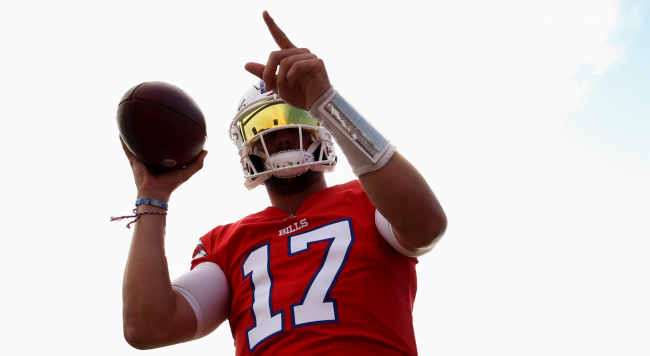 It’s too bad that Hard Knocks isn’t filming at Buffalo Bills training camp this year, because the place has been chock full of entertainment.

We’ve had new Bills acquisition Von Miller getting rolls of toilet paper and packs of flushable wipes sent to him by fans (while he tries to lure Odell Beckham Jr. into coming there).

We’ve had backup quarterback Case Keenum running around in disguise trying to get teammates’ autographs.

And we’ve had franchise QB Josh Allen (who has been very feisty this camp) pranking Bills fans by showing up wearing a stunning red helmet leading them to believe they would be wearing them at some point this year (they won’t).

Then there was an incident after a recent practice at Highmark Stadium in which Allen was jogging off the field into the tunnel, waving to fans as he departed, when someone tossed a football at him – a football that was still in the box!

After being struck by the box, Allen hit the brakes, turned towards the fan and shouted at them and calling them disrespectful.

Supposedly, the fan who threw the football was hoping to get an autograph as others had earlier thrown jerseys to Stefon Diggs for him to sign.

@johnniexwhite Replying to @jaycee3434 Its disrespectful to throw stuff at people in they face. Pro athletes are human too. #fyp ♬ original sound – Johnnie ✅

“They’re Bills fans…what was he expecting?” one viewer commented.

“As a Bills fan that makes me mad,” another wrote.

“Bills become contenders and their fans don’t know how to act,” someone else commented.

However, Diggs too was overwhelmed by all the stuff being thrown at him to sign and after signing a few jerseys he too exited the premises with a shrug.