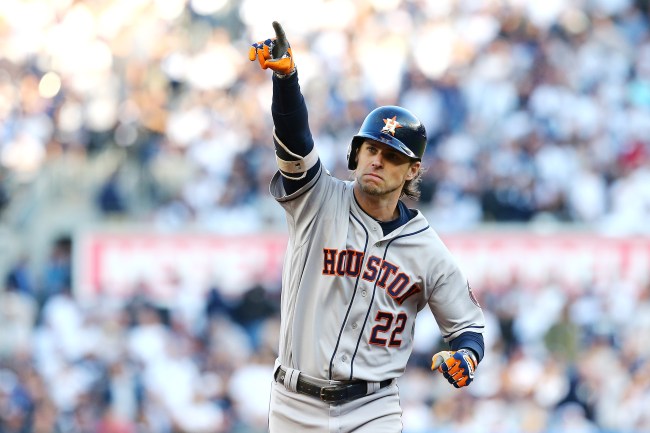 Josh Reddick is trying to move on from the Houston Astros’ cheating scandal, which has left sports fans everywhere pissed off about the team winning a World Series title by implementing a complex system to get a leg up on its competition. From former players talking about the punishments some of the players involved should receive, to current guys talking about how they plan on beaning Astros players as revenge, the entire thing is an embarrassment to major league baseball.

While MLB Commissioner Rob Manfred hasn’t exactly handled the situation well, one thing that nobody’s really talking about is the fallout on some of the Astros’ players. For instance, Josh Reddick described some of the threats he’s been receiving from idiotic baseball fans as more details leak out about the Astros’ cheating scandal. These include ugly things like fans saying they’d kill him and his family, to some even hoping his five-month-old twins get cancer. Just take a look at what Chandler Rome of the Houston Chronicle tweeted out.

Josh Reddick said both he and his wife have received death threats this entire month via social media.

“I’m not the only one,” he said, pointing toward his teammates in the clubhouse.”

Reddick implored the league to protect the Astros players and their families this season.

Josh Reddick said that, earlier this month, he posted a video of one of his five-month-old twins rolling over. A comment immediately read “I hope your kid gets cancer.”

Others he’s gotten said “I will kill your entire family.”

Did the players fuck up? Obviously. Have they done a good job apologizing for doing so? Kind of, but not nearly good enough given the crime they committed in order to win a title. Still, hearing what some people are saying to guys like Reddick is beyond believable. And it’s not just Reddick, because shortstop Carlos Correa echoed what his teammate said about death threats — which comes a day after the whistleblower of all of this, Mike Fiers, admitted that he’s getting threats, too.

“Everyone in here is getting death threats,” Carlos Correa said.

There’s a line being crossed here, guys, as sports fans think that using the protection of a phone or computer screen allows them to say anything they want to to pro athletes. Again, the Astros’ cheating scandal is a black eye on baseball — and is (arguably) the worst thing in MLB since the Black Sox Scandal in the 1919 World Series — but no fan has the right to threaten them and their families.

Seeing how some people are acting following all the reports is insane, and it’s why Josh Reddick has pled with MLB to try and increase security for Astros players and their families as the 2020 season approaches. Although nobody wants to think something like this would happen, some people are crazy AF, so it’s better to offer some protection now in order to eliminate anything devastating happen later. Let’s hope it doesn’t get to that and that these morons making the threats are all talk and nothing more than that.