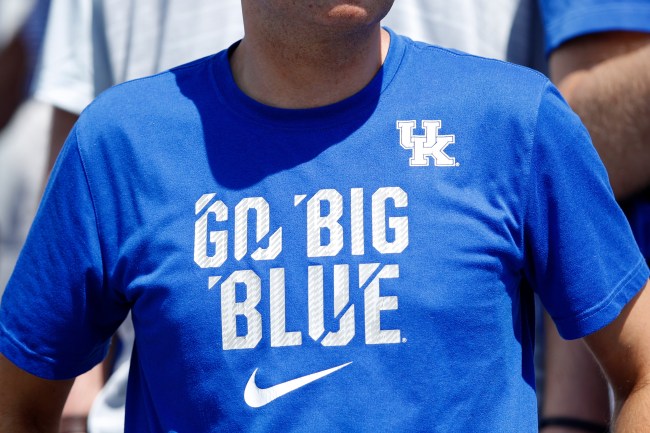 As a Kentucky fan myself — hey, that’s what happens when you give a university thousands of dollars for a degree — I know just how wild Big Blue Nation is. We cry when the Wildcats hoops team doesn’t at least reach the Sweet 16 in the NCAA Tourney. We make excuses for how unlucky our football team is. We boast about having a badass cheerleading squad. We love drinking bourbon while watching horses run around a track on fall and spring weekends — while still making sure we get the customary “C-A-T-S! CATS! CATS! CATS” chant in.

Some of the most passionate sports fans call the Bluegrass home, and it’s pretty awesome to be a part of it — until one person comes along and makes us all look like absolutely crazy people.

That’s what happened the other day when Kentucky Sports Radio host Matt Jones was talking to one Kentucky fan about the current state of sports amid this ongoing pandemic. Like most sports fans, the guy — known as Big Al — sure is frustrated that games and events have been suspended or cancelled, with talk of the upcoming college football season even being moved or cancelled to help eliminate the spread of COVID-19.

With Jones talking about sports being played during the pandemic, the host blatantly asked Big Al a simple question: Would he be cool with one million people dying if it meant sports returning? The caller’s response? “Yes because we would maintain our freedoms.”

Oh, boy, Big Al just went there — and you can hear the Kentucky fan try to explain himself below.

Big Al says he is ok if 1 million people die with Coronavirus if we get to have Football and our Freedoms pic.twitter.com/fmDkZIR4KS

Although shocking on the surface to hear somebody actually say he’d be OK with millions of people dying just for the chance to watch sports, sadly, it’s something a lot of ignorant people probably agree with. Yep, welcome to 2020, folks, where people are so self-absorbed and ignorant that this type of shit spews from their mouths.

Naturally, once people heard the comments from Big Al, there were lots of reactions on Twitter; so take a look below at some of their thoughts.

I am guessing he has never used his freedoms to go anywhere further than 2 hours away.

yes i’m cool with 1M deaths because we maintain our freedoms baby!!

Stunning. Complete lack of humanity and caring for others.

Wonder which one of his loved ones he is offering up.

These people are the reason I never want to leave my house.

Who knows when (or if) we’ll ever get back to “normal” as we fight this pandemic? Hopefully it’s sooner rather than later, but that’s absolutely wishful thinking. And, with the threat of college football not being played come fall — and really smart college kids actually taking part in competitions to see who catches the virus at parties (see: Alabama coeds) — it seems likely sports won’t be returning anytime soon. That may piss off the Kentucky fan known as Big Al, but, sorry dude, it’s for the best in order to keep people safe and, you know, from dying.