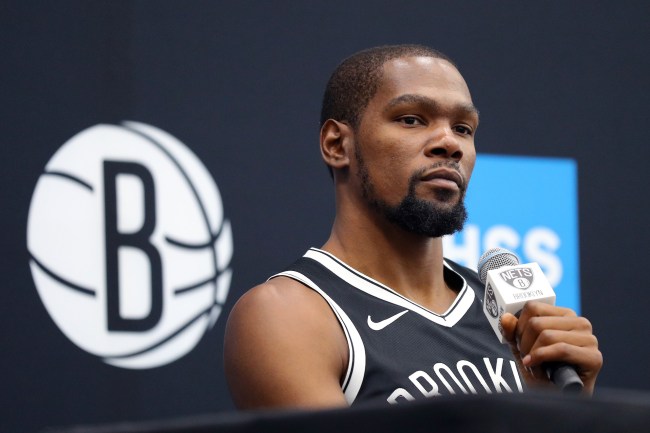 Last time we saw Kevin Durant on a basketball court, he was lying on the hardwood holding his lower leg and grimacing in pain. That was during Game 5 of the 2019 NBA Finals, when his then Golden State Warriors were taking on the Toronto Raptors, which, ultimately, ended with the Raps capturing their first ever NBA championship.

Fast-forward four months or so, and a lot has changed since that moment. Kevin Durant is now a member of the Brooklyn Nets, signing a mega-deal with the franchise in the offseason. The Warriors are no longer the perennial favorites to win a title as the new NBA season begins. And even the Raptors look different now, with the team celebrating its championship without the NBA Finals MVP, Kawhi Leonard, who suited up in his first game with the L.A. Clippers.

Another thing that’s changed since that awful Achilles injury that Durant suffered? The one-time league MVP’s mindset now that he’s got the proper prognosis, has had surgery and is in recovery mode. That wasn’t the case immediately after the injury, however, with Kevin Durant recently admitting on The Athletic’s Knuckleheads podcast that he feared the worst after his Achilles blew out on him.

Admitting that his “whole career just went flashing in front of my eyes,” Durant opened up about the real possibility that, at 30 years old and one of the best players of his generation — in a contract year, no less — his basketball days were over. Transcribed by Alex Smith over at SNY, here’s what KD had to say about the potentially catastrophic injury.

“I really was like, shit, I done came down here, my J feeling nice, I’m hitting bottom, straight bottom, pulling up on the break, and I’m actually playing and sliding my feet a little bit. So my shit feeling good, and then I tried to, I felt like I was back at the park, step back real hard, and then I’m telling you it was like boom, and I felt it immediately. It was like a pop and I was like ‘Nah.’ … It felt like I was walking on a hill and my right foot was on like a slant … so like I was walking down a hill.

An Achilles injury is one of the most difficult to comeback from as a pro athlete, especially someone with the mileage that Kevin Durant has. While there have been predictions as to what type of player Durant will be once he does return — with one top surgeon offering up a hot take — the Nets are hoping they didn’t just give the two-time champion $164 million to be a shell of himself once he does return; which, at this point, doesn’t have a set timeframe.

Here’s hoping that Kevin Durant can work his way back and be the explosive player he’s always been. A once-in-a-generational talent and surefire Hall of Famer, it’d be awful to see Durant struggle with any lingering issues from the Achilles injury moving forward — because he’s a definite joy to watch on the basketball court.