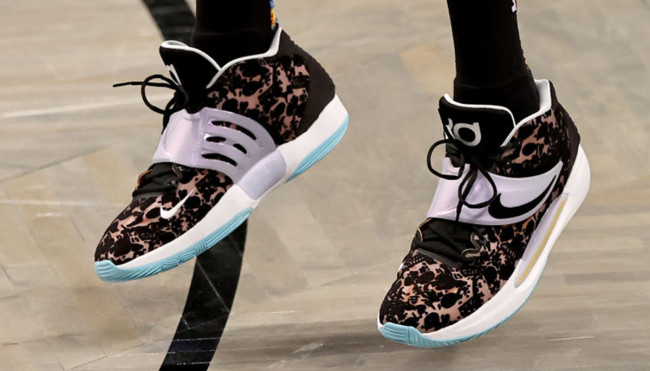 LeBron James has dominated the NBA over the course of his career in the same way his magically fluctuating hairline has dominated the conversation when it comes to the players in the league who have some particularly interesting stuff going on up top.

I can only imagine LeBron breathed a slight sigh of relief when Trae Young was drafted, as he’s been granted a bit of a reprieve thanks to a rising star who seemingly stops by the barbershop inside State Farm Arena to grab a few clumps of hair that he can glue to his head before every game. However, both players have taken a backseat to the big name who’s recently emerged as a favorite target: Kevin Durant.

Earlier this week, Evan Fournier pounced on the chance to take a shot at Durant’s infamously unkempt hair after he announced he was on the search for a new barber in New York City. Now, the slander has continued courtesy of a Reddit user who pointed out an uncanny and hilarious similarity between his patchy thatch and the pattern on the KD 14s, the most recent iteration of Durant’s signature shoe.

Is the KD14 design supposed to be KD’s hair? from nba

Durant showed off the colorway in question during a game against the Lakers earlier this year, and while it took a few months for someone to make the comparison, it didn’t take long for other people to get in on the action—including one Reddit user who harnessed Photoshop to create what can only be classified as “art.”

I still don’t understand how NFTs work, but I’d still pay way too much money for the rights to own that one.