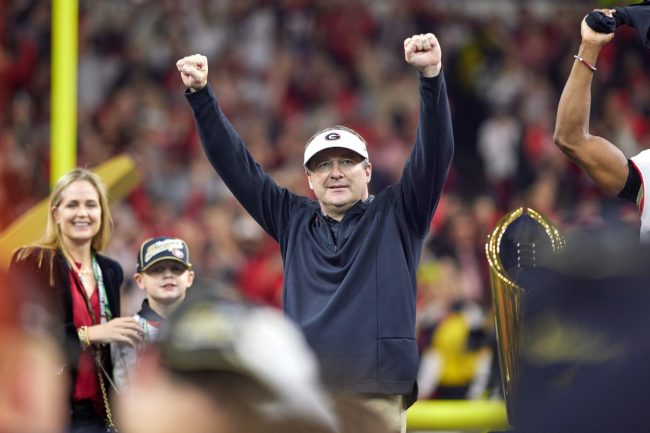 When the clock hit zero on Monday night and Georgia football officially won its first National Championship in more than four decades, Athens went wild. Students and fans flooded the streets, people were climbing light poles and the party didn’t stop until the wee hours of Tuesday morning.

On the bus ride home from the game, director of strength and conditioning Scott Sinclair sat next to head coach Kirby Smart and pulled out his phone. He had pulled up a video of the scene in downtown Athens after the win and wanted to show the man who was responsible.

Smart was impressed. He was thrilled to see the joy that he brought to the fanbase.

When asked about the party on Tuesday, Smart compared the scene to a Widespread Panic concert.

“First thing I thought of was Widespread Panic in 1994 or whatever it was,” Smart said. “I was, like there’s people on signs. There’s people on poles. You can’t see the street. I didn’t even know where it was. But was pretty blown away. Hopefully everybody was safe.”

When Kirby Smart saw people partying in Athens “first thing I thought of was Widespread Panic in 1994 or whatever it was” pic.twitter.com/ikxGkXKwG4

Smart, who was born in Montgomery, Alabama, grew up in Bainbridge, Georgia. About four and a half hours south of Athens, Georgia, Smart could have been at the Widespread concert in 1994.

The legendary jam band, which originated in Athens, played two shows in their “hometown” that year. However, Smart would have been a senior in high school.

More than likely, he is referring to the Widespread Panic concert on Washington Street in Athens in 1998.

Smart played football at UGA from 1995 to 1999 and was a member of the Sigma Alpha Epsilon fraternity, which is incredibly on-brand for a Widespread Panic fan. The concert in 1998 took place on April 18th, which would have been the spring of Smart’s junior year.

The band set up stage in front of the SAE house and the people of Athens packed the streets to celebrate the release of the band’s first live record, ‘LIGHT FUSE, GET AWAY!’

On this day in 1998, people packed onto Washington Street in Athens, GA for Panic in the Streets to celebrate th…

Here is some local coverage of the concert:

And here is Widespread Panic’s entire second set from that day:

Smart is a noted Widespread Panic fan and was obviously there that day.

After seeing the video of the scene in Athens after the Dawgs won the national championship, Smart said the atmosphere was similar to 1998. Epic.

Back in 2019, Smart played a round of golf with lead singer and rhythm guitarist John Bell.

He was asked a few months later about someone he had played golf with in the past that made him most nervous during an appearance at the Touchdown Club of Atlanta. Smart was quick to answer that it was Bell.

“JB from Widespread Panic,” he said. “I was pretty nervous hitting my first tee shot in front of him.”

In response, the reporter said: “He’s gotta be a Dawgs fan, so perhaps JB was nervous hitting in front of you too?” Smart was quick to shut that down.

“Nah man, that guy didn’t give a shit about playing in front of me,” he laughed. “He wasn’t nervous about anything.”

Smart was also asked about his favorite Panic song at the Touchdown Club of Atlanta. Once again, very quickly, Smart replied that it is Space Wrangler.