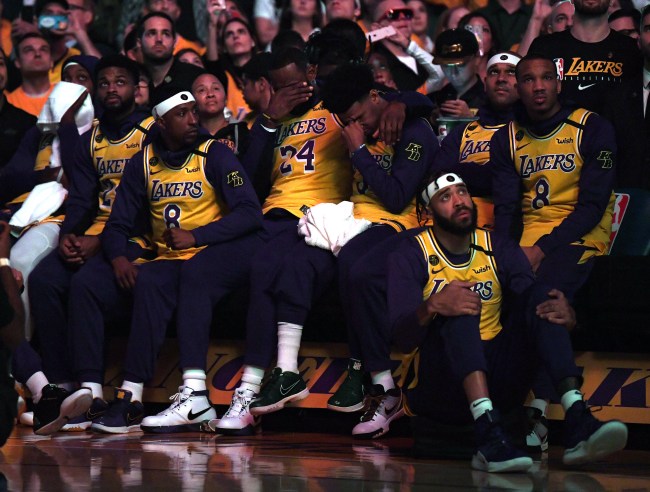 The tragic Kobe Bryant death from a helicopter crash on January 26 will forever be a day millions of people remember. Not only did the sudden accident kill the Los Angeles Lakers legend, but it also took the life of his 13-year-old daughter Gianna, as well as the seven other passengers aboard the flight. Even now, a few weeks later, it still doesn’t seem real that we’ve lot someone of Bryant’s stature in such a horrific fashion.

As everyone still processes the incident, one person who visually took things hard was current Lakers guard Quinn Cook, who signed with the team last offseason. Like most 20-somethings who played basketball, Cook grew up watching Bryant dominate on the hardwood, then watched him turn into an ambassador of the game once he retired and started the whole Mamba Mentality mantra. It’s part of the reason why Cook joined thousands outside Staples Center to mourn the loss of the nine passengers days after.

And, as more details get released about the cause of the tragic Kobe Bryant death, we hear more and more stories about how people found out, with millions reacting in ways of disbelief. For Quinn Cook, though, he and his teammates were aboard a team plane coming back from Philadelphia when the heard the news about the tragedy, and, for the first time, we now know what the scene was like on that flight.

Joining teammate Danny Green’s YouTube show, “Inside the Green Room with Danny Green,” Cook broke down how he found out about Bryant’s death, and how LeBron James, eventually, rallied the team in prayer after the reality of the incident soaked in.

The Lakers guard says just minutes after Kobe, his daughter, Gianna, and 7 others were tragically killed in a helicopter crash on Jan. 26 … he was shaken awake by head coach Frank Vogel on the team’s ride back from Philadelphia.

“He’s like, ‘Quinn, sorry to tell you, but Kobe and his daughter have been in a helicopter crash,'” Cook said on Danny Green’s YouTube show, “Inside the Green Room with Danny Green,” this week. “‘We don’t know any details.'”

Quinn says Vogel had that talk with everybody on the team plane … and he says once the news really set in with the players — the whole squad was devastated.

“I look in front of me and I just see LeBron and AD and Randy and AB, Dwight — everybody was just crushed.”

Quinn says LeBron James eventually got all the guys together in the middle of the plane and led a team prayer.

“[It] was very, very, very, powerful,” Quinn says. “And, after that, like Danny will tell you, I was crushed. I was crying the whole flight. I was absolutely destroyed.”

That’s heartbreaking to hear from Quinn Cook, man. For most of us, once news hit about the tragic Kobe Bryant death, it sent a wave of emotions through our bodies, and was something nobody could comprehend. The five-time NBA champ seemed indestructible, and was just scratching the surface of ways he was going to inspire millions of people. And for his daughter and the seven other passengers to be taken so soon, too? It just didn’t make sense.

For this Lakers team, players like James and Anthony Davis paid tribute to Kobe Bryant by getting tattoos on their legs, while the entire organization tries to move on from the tragedy and win a championship in honor of the Black Mamba.