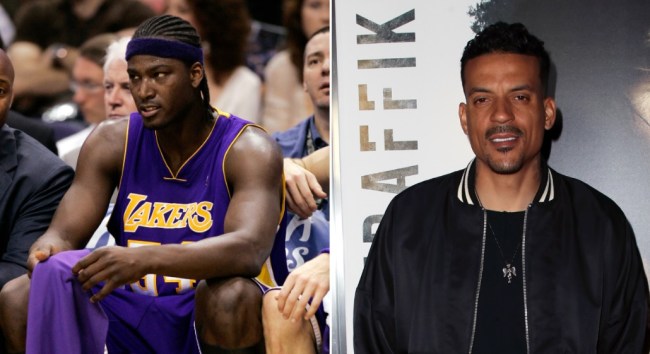 Over the weekend, Brown went on a tirade blasting Matt Barnes, Stephen Jackson, and Gilbert Arenas after they talked about why he was a bust in the NBA on the latest episode of “All in the Smoke’ podcast.

Kwame Brown has a message for Gilbert Arenas, Stephen Jackson and Matt Barnes

Stephen Jackson maybe you can put that motherfucking blunt out and pull your pants up on your ass and put that rag down and act like a grown ass man instead of a little ass boy.

Becky with the good hair, go to counseling and Gilbert you already knew, I was quiet on you for years and I wasn’t going to say nothing…you took food, what did I get 3 years/ 85 mil for the Lakers, I was supposed to get 88…N***** you took millions out my mouth, and you shout like you love black folks, you’re the whitest black boy I’ve ever known.

On Monday, Barnes responded to Brown by saying he didn’t feel like he said anything wrong but “if you wanna be mad at anybody, be mad at MJ for picking you No. 1.”

"Good luck bro" – @Matt_Barnes22 on Kwame Brown and the, um, criticisms Kwame levied over the weekend at him, Stephen Jackson and Gilbert Arenas. pic.twitter.com/MvEeoRQFF0

Brown released another video that features him singing a song about Matt Barnes losing his wife to his former teammate Derek Fisher.

Derek Fisher done opened your doors to your house, to your truck, you b*tch ass n***** send some gas money so he can pick those kids up.

The only joke you got is about basketball, I got a joke about your life, you punk b*tch, what is Derek Fisher is he the mentor or the stepdaddy? or what? Cause he’s your mentor too you punk.