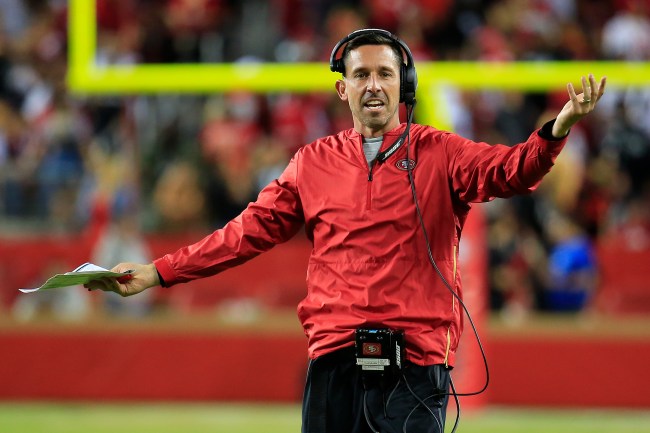 Kyle Shanahan is preparing to lead his San Francisco 49ers into Super Bowl 54 against the Kansas City Chiefs, with the head coach looking to duplicate what his father, Mike Shanahan, did twice with the Denver Broncos in the late-90s — capture a title. As we wait to see how things unfold in the Big Game on Super Sunday, it’s hard to ignore an obvious pink elephant in the room: the starting quarterbacks for each team.

Look, the Niners reached the Super Bowl with Jimmy Garoppolo under center and a dominant defense, whereas the Chiefs rode the hot hand of reigning league MVP Patrick Mahomes. While both strategies proved effective, it’s hard not to play the “what if…?” game, rewinding the clock to three years ago.

Back in 2017, the 49ers were sitting at No. 2 in the NFL Draft and looking for a franchise quarterback (Note: The team ended up trading back to No. 3 with the Chicago Bears). This was prior to Garoppolo joining the team — which occurred in the middle of the ’17 season through a trade with the New England Patriots. Yet, as starved as they were for a face of the franchise, the team elected to choose defensive lineman Solomon Thomas with the third overall pick, not Mahomes. So what was the reason? Kyle Shanahan was asked that exact question during Super Bowl week, and, honestly, his reply came across as a little lazy.

“I didn’t look into him obviously as much as I should have,” Shanahan said Tuesday. “We definitely looked into him, studied all of his tape. Was just a freak, could make any throw, had the ability to anything. That was a little bit different situation for us. We had the second pick in the draft, did not feel like from all the intel that you get and stuff that he was gonna go that high.”

“You saw a bunch of talented guys in that draft,” Shanahan said. “It’s very tough when you watch college systems and stuff, you don’t really know until you get someone in the building. You can see ability, you can see talent, but how’s the mind? How do they play in the pocket? How do they process? That’s not just an IQ score. That’s some stuff I don’t think you can totally test. You gotta go through that with them, so there’s always a risk when you spend a first-round pick on a quarterback. With the situation we were in, didn’t want to be that risky, especially with the second pick in the draft.

“We didn’t do that as hard. Obviously, he ended up being one of the best players in the league along with a couple other quarterbacks that year. But he’s extremely talented.”

Wait, did Shanahan really just say they “didn’t look into him [Mahomes] obviously as much as I should have?” Isn’t the NFL Draft the one time when teams should dig as deep as possible on every possible selection? Sure, Mahomes was coming from an air raid offense at Texas Tech, but he flashed superb physical ability (and smarts) to warrant more than just watching film.

While the Niners have their guy in Garoppolo, he’s not nearly as talented as the superstar that is Mahomes — which isn’t meant as a knock, it’s just the truth. And although Kyle Shanahan might just be protecting his current quarterback with his reply to the question about the 2017 draft, every Niners fan has to be wondering why it comes across as the front office just not doing their jobs to evaluate the Kansas City signal-caller.