Kyler Murray’s College Coach, Lincoln Riley, Made A Weird Comparison To An All-Time Great Running Back 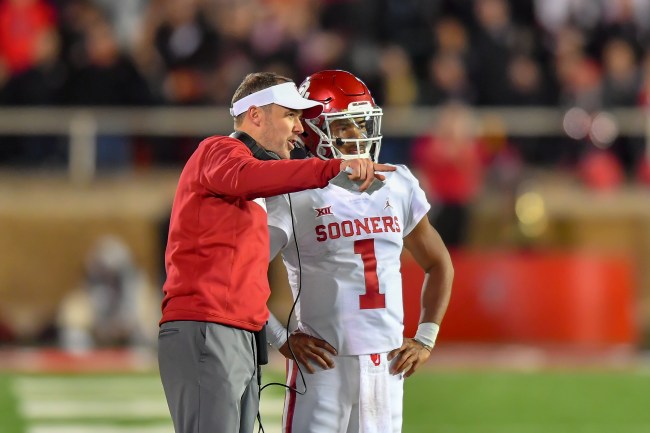 Kyler Murray is as freakishly athletic as a human being gets, we all know that. Not only was he a top-10 pick in the MLB Draft, but, in his only season as a starting quarterback in college football, all he did was lead his Oklahoma Sooners to the College Football Playoffs and win the Heisman Trophy, so the dude is a legend.

After deciding to pursue a pro career in the NFL, and not in the MLB, Kyler Murray’s now being talked about as a possibility for the No. 1 overall pick in the NFL Draft — and his college coach at Oklahoma, Lincoln Riley, seems to be open to really selling NFL teams on how much of a once-in-a-generation talent Murray is.

While a guest on The Herd with Colin Cowherd today, Lincoln Riley didn’t just sing Kyler Murray’s praises as a quarterback, but he also compared the kid to a Hall of Fame running back: one Barry Sanders. No, really, Riley went there; take a look at what he said, per Yahoo! Finance.

“Athletically, there’s no comparison to this guy. This is like Barry Sanders running with the football as a quarterback,” Riley said on The Herd with Colin Cowherd on Friday. “I’m not saying he’s as good of a runner as Barry Sanders, but the guy that has elite speed, elite quickness and has a feel for not taking big hits when he runs. Even though he ran more than Baker (Mayfield) did, he took way, way less hits because he is so athletically gifted, he just avoids them. He doesn’t take big shots, and he avoids them as well.”

Well, no pressure or anything, Kyler.

Look, it’s understandable that Kyler Murray’s former head coach wants to tout the kid as much as possible to help his NFL Draft status, hoping to convince teams to consider taking the quarterback as high as possible. But to say Murray’s like Barry Sanders when running the football is so extreme that someone should ask what Lincoln Riley was smoking before saying it.

With all due respect to Murray — who rushed for 1,001 yards, passed for 4,361 yards and scored a total of 54 touchdowns — Sanders was one of the best running backs to ever live; and that’s in both college and the NFL. For Riley to suggest that Kyler can even sniff what the Detroit Lions great did is a total insult; especially when considering the signal-caller only played one season at Oklahoma.

There’s a ton of hype around Kyler Murray, and rightfully so, but let’s not all get carried away with comparing him to NFL greats at different positions. We still need to see how he stacks up under center first, and make sure he’s really like Russell Wilson more than he is a running back who’s playing quarterback.