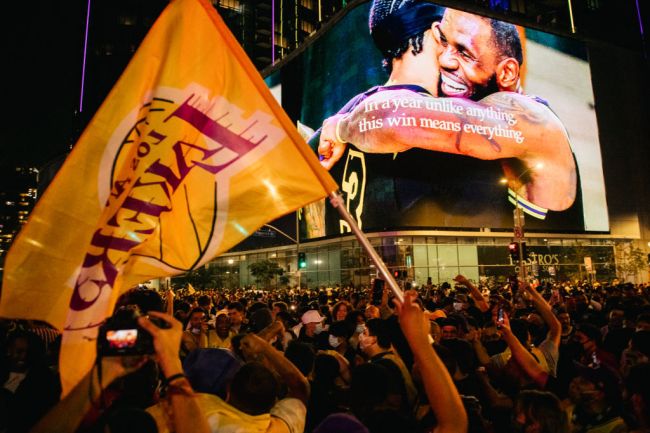 I don’t have to break the news to you that LeBron James has claimed his fourth NBA Title and the Lakers went on to win the 2020 NBA Finals on Sunday. It was a wild season, to say the least, and one that nobody could have ever imagined or predicted. Things are about to get even wilder with the Lakers coming home to celebrate their win and with a cast of characters that this team has, I can’t help but predict who we can expect to see the most content/meme worthy videos from during this celebration week in Los Angeles.

Nothing to hide here, within seconds of the clock striking 0, Smith was found with no shirt on jumping with joy. Do not by any means expect the chaos out of Smith to stop in Orlando, this man is bringing a PARTY back to Los Angeles without a doubt. Smith, who didn’t see much time on the floor, will without question make up for it in his minutes on your timeline during this championship parade.

I’ve got to say I’m interested to see how Dwight goes about this celebration. There is no question he has always been a bit of a punching bag for the internet, and now it’s time for the once NBA superstar to strike back. I could be wrong here but I am expecting Howard to go on a celebration rampage and be popping bottles for a good two weeks until the internet decides to start trolling him again. Have at it Dwight, you deserve it.

This is a huge win for any guys out there with a receding hairline. A backup point guard with a vicious receding hairline having his day on top of the world is big. I expect Caruso to hammer away on all sorts of alcohol throughout this victory parade and simply have the time of his life. I love this guy and am expecting BIG things out of the former Texas A&M Aggie.

Love em or hate em, you can not help but tip your cap to this Lakers team. What seemed like a dumpster fire of a front office at the end of last year, has turned into a championship run that will never be forgotten. Don’t walk away just yet though, the party is just getting started for these guys.