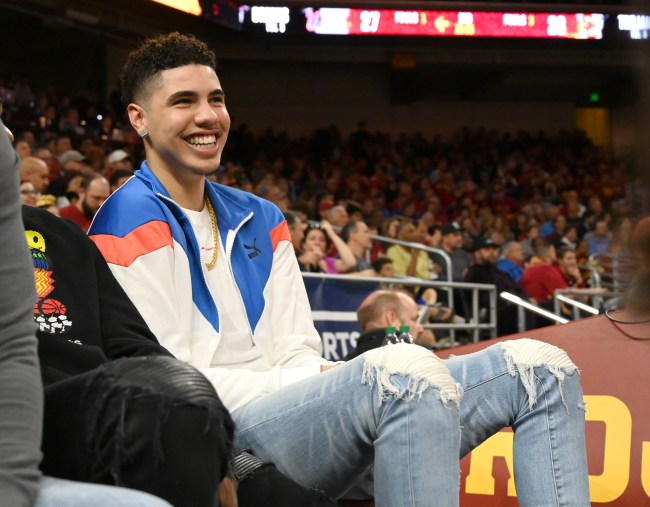 It’s been quite the past few months for LaMelo Ball, who was recently selected No. 3 overall by the Charlotte Hornets in the 2020 NBA Draft. The choice may have surprised some — as LaMelo was projected to go as high as first overall leading up to the draft — but now that the talented point guard’s in Charlotte, we’ve got plenty of entertainment after the rookie’s outspoken dad, LaVar Ball, once challenged team owner Michael Jordan to a one-on-one game.

OK, while LaMelo Ball’s dad probably isn’t going to get his day on the court with MJ, there’s still plenty to talk about with the young guard. And after he signed his first Hornets contract, the Internet had the pleasure of seeing just how Melo spent his first paycheck, with Ball posting a video (albeit a blurry one) of a diamond grill.

First reaction: Whoa. One of my pickup lines on my fiance was that she had a smile that could make a room shine, and while it’s true for her, damn, LaMelo Ball sure did take things to the next level and can now literally make a room brighter. I have no idea how many diamonds are in that grill, but it sure seems like a lot, so it’s one way to make a rookie statement.

Once social media was blessed with such boujiness from LaMelo, a few people had some pretty solid reactions. Take a look at what some on Twitter had to say about the shiny grill.

priorities, man! shame that he hasn't learned from people like Delonte West what can happen when you blow money like that.

Stupid is as stupid does.

Say what you want to about LaMelo Ball’s new grill, but considering his Hornets contract is believed to pay him over $35.5 million over the next four seasons — which includes a salary of about $7.8 million in his rookie year — the kid has plenty of money to reward himself for making it to the NBA and becoming a high lottery pick. And with his older brother Lonzo Ball around to show him the ropes, the rook has a good mentor to lean on so not to get too out of hand with his spending habits. But, hey, you’ve got to splurge every once in a while.