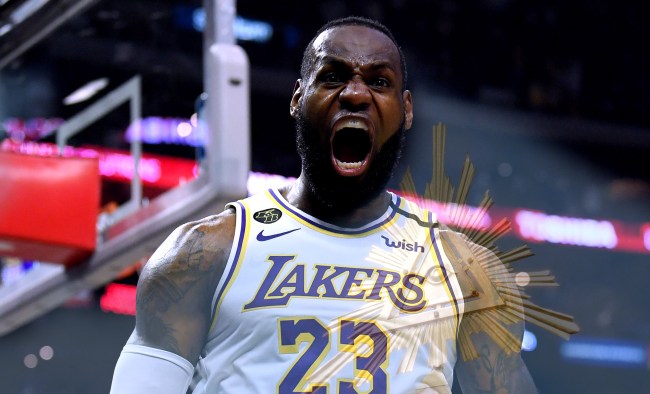 We love us some conspiracy theories. Can’t get enough of them. Especially when they involve the rich and famous or sports. It’s even better if the conspiracy theory involves both of these things, as is the case today with Lakers superstar LeBron James being the target of a brand new one that’s a real doozy.

This new conspiracy theory being put forth regarding King James claims that the NBA legend is secretly a “illuminati wizard.”

Told you it was a doozy. In fact, it’s so wild that it wouldn’t surprise me in the least if former NFL running back and noted crackpot Larry Johnson threw up a co-sign on it.

The idea has been gaining some traction after conspiracy theorist Sheila Zilinsky went on her show and told her listeners that every time James claps his hands during his famous pregame chalk toss, he is actually summoning some demons.

“The sports world calls it a chalk toss, but it’s simply disguise for what he’s really doing,” said Zilinsky. “A high level conjuring, a spell, an incantation from this Illuminati wizard, where he’s summoning demons. I believe he’s conjuring up demons before every game. Plain and simple.”

Amazing, right? And if true, Kyrie Irving would probably like to have a word with LeBron.

Then, as if it couldn’t get any better, thanks to the Twitter account Right Wing Watch, her nonsense has been heard over 540,000 times as of this writing.

Right-wing conspiracy theorist Sheila Zilinsky warns that LeBron James in an "Illuminati wizard' who is "conjuring up demons before every game" by tossing chalk into the air. pic.twitter.com/hh0LHPLapo

Naturally, Zilinsky’s conspiracy theory about LeBron James has resulted in more than its fair share of awesome comments.

LeBron is a chalk wizard. He’s the first African-American chalk wizard ever. Chalk was in vented by a white man, James Pillans and kept the secret of the chalk in Scottland. But, some Scottish dude said the hell with it I’m giving LeBron the secret and the rest is chalk history

He's conjuring demons but only brought us one 🏆!!! Some lame demons.

LAKERS IN 5! NUGGETS AIN'T GOT A CHANCE NOW THAT I KNOW @KingJames IS SUMMONING DEMONS!

So you telling me, he can conjure up demons but can’t grow his hairline back...

Is it against the rules to summon a demon to help you win? I don’t see it in the rule book, it’s an air bud rule

Where exactly can someone sign up to be an Illuminati wizard cuz that sounds cool AF?