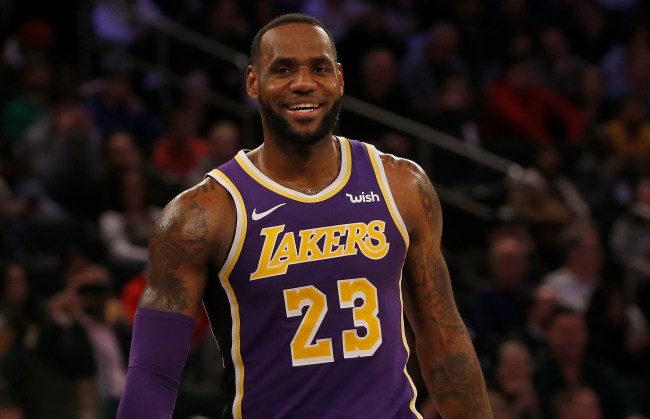 LeBron James seems to be enjoying life on the west coast. The Los Angeles Lakers superstar has been spotted soaking in the sunshine since the NBA season got suspended a couple months ago, and teasing some of his off-the-court projects like Space Jam 2, proving that his move from the Cleveland Cavs to the most iconic hoops franchise on the planet seemed to be a good one.

While James is still on the hunt for a title with the Lakers — which is currently on pause because of the pandemic — and doesn’t appear to have any gripes with his decision to join the Purple & Gold, because he’s, arguably, the most polarizing athlete on the planet, people will always talk about him. And, even though Bron has a couple more seasons left on his Lakers deal, there’s still speculation out there (or false hope) that he could already be plotting an exit strategy and heading for the New York Knicks.

That’s according to the New York Post‘s Marc Berman, who was asked in a mailbag forum from fans about the possibility of LeBron James coming to the Knicks. Before you even laugh at the idea, given how pathetic the franchise has been over the past couple of decades, allow Berman to at least humor you with why it could be a possibility for the four-time league MVP to head to Gotham in a couple years.

I will never rule this one out — especially for his last season before retiring.

James has said the Garden is his favorite arena to play in. A lot depends not just on how his Lakers’ title journey pans out, but his son Bronny’s timetable.

Bronny James, finishing his freshman year at Sierra Canyon High School, is 15 years old and not eligible for the NBA draft until 2024 under current guidelines.

James, whose Lakers’ contract expires in 2022, would be 39 by then. He’s made no secret of wanting to play with his son. That would be a first in NBA history. James is very conscious of his legacy. Finishing it out in New York could add to his place in history.

So the argument here is that, because New York is the biggest media market with a storied arena, Madison Square Garden — one in which LeBron James loves playing in — that the Knicks could be a potential landing spot for the three-time champ? Seems a little bit of a stretch. Plus, as Berman points out, would Knicks fans really care to get a 39-year-old James who was looking for nothing more than to maybe played with his son; assuming Bronny James is even good enough to bypass all or most of college to head to the NBA? All of this just seems like mindless fodder, but maybe that’s just me.

Berman did go on to reference James’ response to a question earlier this NBA season about maybe playing with his son on the Knicks — which the star abruptly shot down by reminding reporters that Bronny’s still only in ninth grade. Yet, since LeBron didn’t come out and just say “no,” maybe the Knicks have a chance at pairing the two together in a couple years.

When James was at the Garden on Jan. 23, he was asked if he would want to play for the Knicks if they drafted Bronny. James was amused.

“My son is in ninth grade, man,’’ James said. “We’re trying to worry about what project he’s got to turn in tomorrow, that’s what [we’re] worried about right now. That’s what’s most important: school, home and being the best big brother he can be.”

James didn’t say no. One food for thought is James’ superagent, Rich Paul, finally has a vested interest in the Knicks. The NBA power broker recently became the new agent for bedrock piece, center Mitchell Robinson.

After James bypassed the Knicks in 2010 free agency, sources told The Post James couldn’t see playing for the Knicks because of the fishbowl scrutiny on his family. That’s no longer an issue.

It’s been a tough past 20 years for New York Knicks fans, who have been bypassed by some of the biggest superstars in the league for whatever reason, so this whole rumor of LeBron James just maybe coming to the franchise could bring a glimmer of hope. Then again, seeing as how the team’s been burned so many times before — and the fact James would be nearly 40 if he did end up actually suiting up in New York — this could all just add more agony to an already depleted fanbase.