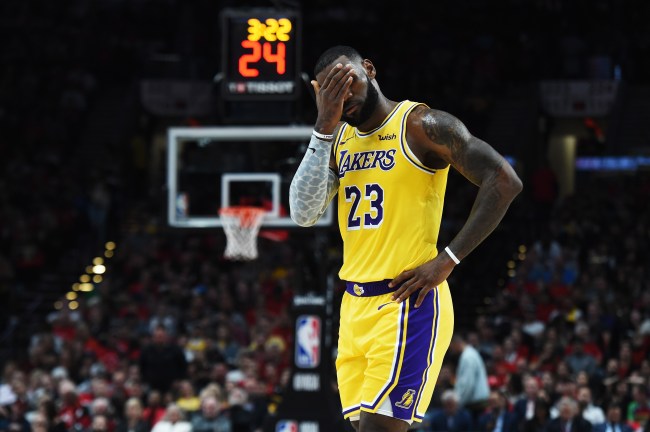 LeBron James has played in nine NBA Finals’ during his illustrious career, winning three championships with two different teams, so the guy knows a thing or two about what it takes to compete for titles. And with his Los Angeles Lakers owning the best record in the Western Conference at the moment, James could be preparing for yet another opportunity to get himself a ring.

But, if you ask FS1’s Ric Bucher, that’s not necessarily on James’ mind this season.

While discussing LeBron James’ happiness right now with some of his fellow hosts on the show Speak for Yourself, Bucher actually supported a thought that the four-time league MVP is more than happy in his personal life, but he might not necessarily be happy with his basketball life and/or the Lakers’ front office. Why? To be blunt, because Bucher thinks James is done “gunning for championships,” claiming that his lack of aggressiveness towards the front office regarding the NBA Trade Deadline shows that LeBron might not care about titles as much anymore. Just take a look of the suspect claim by the longtime NBA reporter in the video below.

As extreme as this sounds from Ric Bucher, it actually kind of makes sense. Sure, LeBron James has to be happy with where his Lakers are right now in the standings, but, on paper, are they better than the Los Angeles Clippers? Are they better than the Milwaukee Bucks should both teams reach the NBA Finals? Are they a real threat to win another title? It’s hard to say since they lack depth at certain positions.

The Lakers missed out on adding key pieces at the trade deadline, and, while that wouldn’t necessarily be a huge deal, given James’ history of passive aggressiveness to get his previous teams to shore up the roster prior to the postseason, it is, in fact, a bigger deal than you might think, as Bucher points out. LeBron ran things in Cleveland, pushing the front office to wheel and deal to get the superstar the pieces he wanted. James was silent leading up to this year’s trade deadline; which is very much unlike him.

On the contrary, Bucher outlines the obvious about LeBron James’ motivation to be in Los Angeles in the first place: because he wanted to grow his personal brand, his production company, surround himself with major players in the business world and give his kids a chance to play at a nationally-recognized high school hoops powerhouse. It’s something others have mentioned before — hence Bucher’s proclamation that James is happy in his life.

It’s hard to knock a guy who, at 35 years old, is still putting up 25.0 points 7.7 rebounds and 10.8 assists per game, but if the Lakers’ season ends without a title, it doesn’t mean a damn thing. Is LeBron James really done “gunning for championships,” as Bucher puts it? Doubt it, but he sure wasn’t as aggressive this season in demanding things from the front office as he has been in the past — and that has at least one person in the media wondering how determined he is to add titles to his legacy.