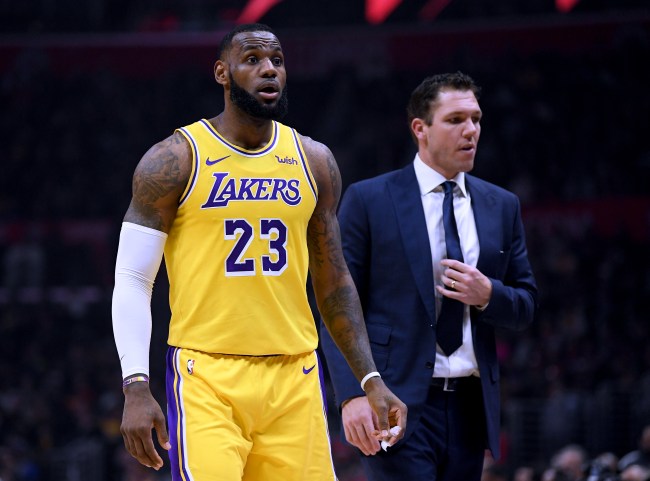 LeBron James and the Los Angeles Lakers are just coming off a 42-point blowout loss to the Indiana Pacers — the worst defeat in James’ Hall of Fame career. It seemed like the team just forgot that they had a game on the schedule, which led to Pacers fans taunting Brandon Ingram with, “LeBron’s gonna trade you,” and, eventually, an image of James sitting solo on the Lakers bench that had the Internet wondering if he’s distanced himself from his younger teammates.

Considering drama seems to follow LeBron James everywhere he goes, there are a lot of people wondering why that might be. Whether it was getting his former head coach, David Blatt, fired midway through the 2015-16 season as the Cavs were in first place in the Eastern Conference, to his passive aggressive tweets over the years, it seems the three-time champ just loves operating under constant dysfunction.

So, why might that be the case? Well, FS1’s Jason Whitlock has a theory — and it has to do with LeBron James growing up and being an only child. No joke, that’s what Whitlock publicly said during today’s Speak for Yourself: Take a look below at the video, via CJZero’s Twitter.

Here's Whitlock's monologue on LeBron being an only child, because woooooo (h/t @robertmays) pic.twitter.com/Wb3b1FplX4

Here’s a breakdown of what Whitlock said, which is one of the most bizarre, yet interesting, theories about why LeBron James is the way he is.

“Like a lot of only children, LeBron is a high achiever, selfish, mature beyond his years, desperate for positive affirmation, independent, sensitive, stubborn when he’s wrong and a creative thinker.”

I’ll say this; Jason Whitlock is really going deep with this opinion. Sure, LeBron James creates and thrives off drama, but it’s probably why he’s so successful, because, in a weird, narcissistic way, he knows that he can control the situation after he gets what he wants. As the most influential athlete on the planet, whether he deserves that or not is debatable, but the dude has gone to eight-straight NBA Finals, so it’s hard to argue with the results.

All that said, Twitter did have some hilarious reactions to Whitlock, so here are some of the best.

Should have had open fires all around him during this flaming take. LOL

Who knows if LeBron James and the Lakers can pull off a big-time trade before tomorrow’s NBA Trade Deadline or not, and, even if they don’t, if they can fix things in time to make a run at the postseason. Whatever happens, though, it won’t be because LeBron’s an only child — but it’s a hell of a theory.