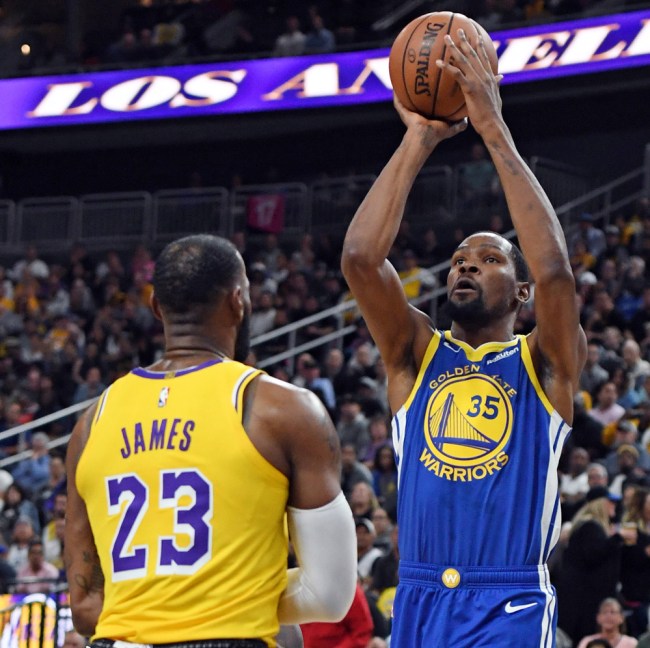 LeBron James is probably started to get a little annoyed with all the people chirping about him this week.

Just in this week alone (and it’s only Thursday), LeBron has had LaVar Ball talking about him and his son, Klay Thompson calling him and his Cavs teams idiots and bums, Kobe Bryant and Magic Johnson telling the media he’s handling the ball too much, Kobe writing checks LeBron is going to have to cash, and Kevin Durant calling the environment around James toxic because of all the “fanboys” and “groupies” he has in the media.

So much hype comes from being around LeBron from other people,” Durant told Bleacher Report. “He has so many fanboys in the media. Even the beat writers just fawn over him. I’m like, we’re playing basketball here, and it’s not even about basketball at certain points. So I get why anyone wouldn’t want to be in that environment because it’s toxic. Especially when the attention is bulls–t attention, fluff. It’s not LeBron’s fault at all; it’s just the fact you have so many groupies in the media that love to hang on every word. Just get out of the way and let us play basketball.”

On Wednesday, after scoring 42 points, 20 in the fourth quarter in the Lakers’ 121-113 win over the Spurs, James was asked if his performance was fueled in anyway by all the chatter about him this week, including Durant’s comments.

“No, for what? I’m past the [taking things] personal stage,” answered James, reported ESPN. “I can do whatever. I can have a huge workload, I can have a not so huge workload. … It doesn’t matter for me. What’s most important is seeing my teammates make huge shots in the fourth quarter. … That’s what’s most important to me. I can care less about the narrative about me. It doesn’t matter. I’m a staple in this game.”

When asked specifically about Kevin Durant’s comment about the environment around him being toxic, James gave a very measured answer, claiming he had not seen it yet.