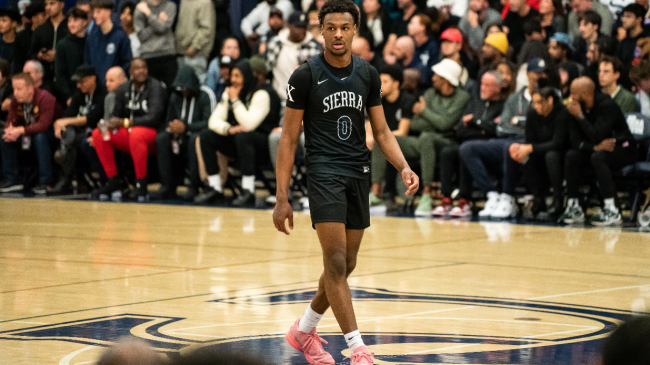 LeBron James is taking some heat for recent comments about his oldest son’s college recruitment. Bronny James, one of the top prospects in the upcoming class, is looking to make a decision on his future.

Fans online are now reacting to the latest update on his standing with a prominent PAC 12 program, as well as his father’s remarks on his ability to land a scholarship offer.

Bronny has been checking out potential landing spots this year as his high school career comes to a close. The four-star guard appears to be most interested in Oregon, Ohio State, and USC.

While the Buckeyes and Trojans have officially offered Bronny, the Ducks have yet to do so. LeBron doesn’t think it will be an issue if he truly wants to play in Eugene.

He recently spoke to The Oregonian while making a road trip to Portland. He opened up on his son’s status with the Ducks.

“[Head coach Dana Altman] knows. He knows the interest, and it’s mutual… Bronny can go to any college he wants to. All I have to do is pick up the phone. If Bronny says he wants to go there, he’s good enough,” said LeBron James.

That statement had many on social media reacting.

One person asked, “What if he doesn’t pick up the phone? Is he good enough then?”

Bronny’s supposed interest in the Ducks stems largely from their ability to put players in the NBA.

“I think it’s the ability to put pros into the league. My son wants to be a pro.”

Oregon appears to be a contender for Bronny James, but they still have to make an offer. We’ll see how much say LeBron has in that decision.

Related: Bronny James throws down must-see dunk that has social media on fire