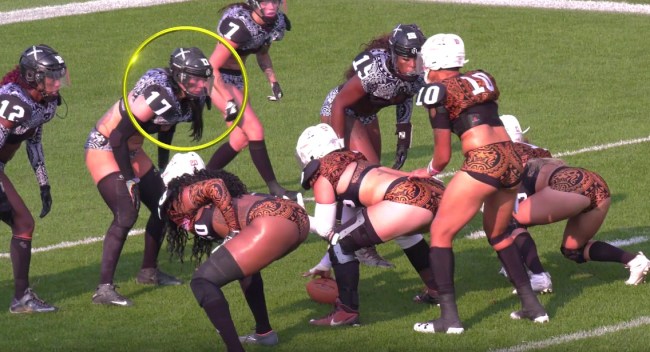 For the life of me I don’t understand why Legends Football League games aren’t all broadcast on national television. If it were, you know that degenerate gamblers (like us) would immediately start throwing down big wagers on the contests just to give us an excuse to watch it.

Then again, even without the wagering aspect of it, the Legends Football League would still be pretty freaking great to watch on TV.

From bad beer chugging celebrations to players and coaches dropping a slew of f-bombs on one another to their excellent new sideline reporter Heidi Golznig, there are tons of reasons why I know I would watch these games on the telly.

Another solid example of why the LFL would be great on TV happened during the recent the Western Conference Championship game between the Los Angeles Temptation and the Austin Acoustic.

With temperatures havering around 98 degrees not counting the humidity, Temptation middle linebacker Meghan Hanson was so into the game, she lost her lunch a second before the snap, yet still almost managed to make the tackle. (After which she puked one more time, just for good meaasure.)

Tell me you wouldn’t watch this if it were on TV right now. (I’d tell you who won, the LFL still hasn’t updated their website with the final score.)

In other LFL news, the league has also started giving out some of their end-of-the-season awards.