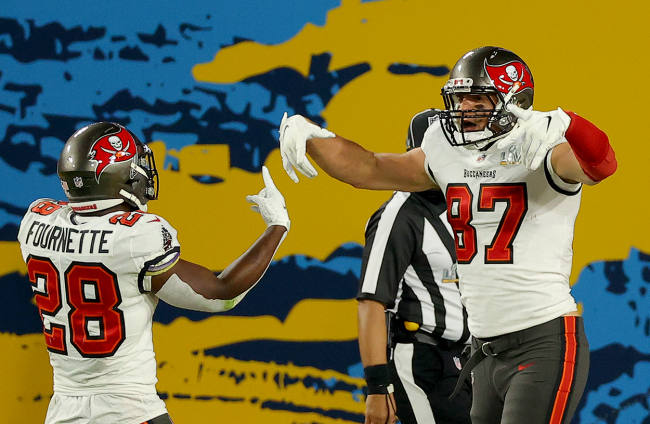 After 11 seasons in the NFL, tight end Rob Gronkowski officially retired from football last week— again. He shared an incredible story during his retirement announcement and it sounded pretty definitive.

His agent left the door open for a possible return, but NFL insider Jordan Schultz essentially confirmed that the decision is final.

That isn’t going to stop Leonard Fournette from trying to change Gronkowski’s mind.

During a recent appearance on The Rich Eisen Show, the 27-year-old running back who recently agreed to return to Tampa Bay was asked if he or his quarterback, Tom Brady, would try and lure Gronk out of retirement. Fournette said that yes, he will.

“We’re going to need Gronk, man. Gronk, he’s special to our program, to the team, to that locker room. His energy, his vibe, man. Who wouldn’t want to have him as a teammate? He’s a great guy and I love Gronk.”

As for how he plans to try and convince Gronkowski to un-retire (again), Fournette revealed that his strategy is going to be persistence and tenacity.

His efforts will not relent.

“Just know, I will be calling his phone 24/7 for the offseason, regular season.”

Now, Fournette is not sure if his tactics will work. He doesn’t know if Gronkowski will come out of retirement (again) and return to the Buccaneers for one — or two or three — last rides.

That doesn’t mean that he isn’t remaining optimistic.

“I don’t know, but the ‘Playoff Lenny’ in me wants to say I hope he does.”

Gronkowski has come out of retirement before. However, the first time, his return to the NFL came after taking an entire season off. Could he return for one last playoff push?

If Fournette has anything to say about it, he will. But it doesn’t seem particularly likely.