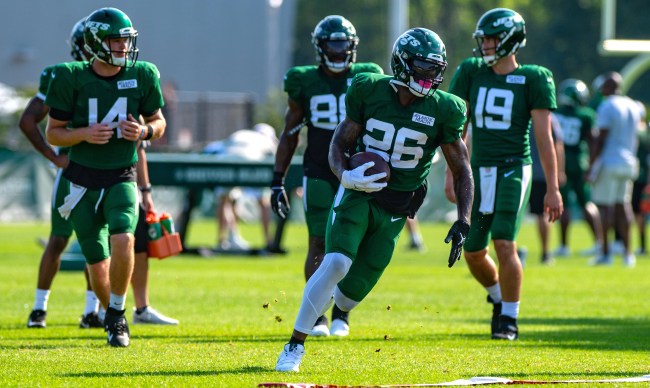 No one does petty these days like a scorned professional athlete (see Brown, Antonio; Irving, Kyrie; et al) and new Jets running back Le’Veon Bell is no exception.

After hypocritically holding out for the entire 2019 NFL season, Bell signed a 4-year, $52.5 million contract with the New York Jets after previously saying there’s no way he’d sign with them for $60 million.

And now, as he readies for the 2019 season with his new team, Bell is heaping praise on the Jets’ coaching staff, comparing them very, VERY positively to coaches he’s played under previously, i.e. Mike Tomlin and the Steelers’ coaching staff.

“It’s like the best thing I’ve ever been a part of literally,” Bell told the media on Monday. “I’ve literally never had anything like it. Coach Williams is a defensive genius versus an offensive genius. Both of those guys go at it each and every day. It’s like the offense won today, the defense will win tomorrow. Gase is like, ‘Okay, they want to do this, then I’m going to put this in tomorrow.’ It’s the same way with the defense. We’re just continuing to get better each and every day. I’m excited for this year.”

The battles between offense and defense have reportedly sparked more than a few fights, with new guard Alex Lewis and defensive lineman Nathan Shepherd trading blows during Monday’s practice. Not that new head coach Adam Gase seems too concerned about it.

“I love it because it’s competition,” Bell said about all the chippiness. “You’ve got guys like Jamal [Adams] on the other side. He’s literally like me, but plays defense. That’s just two guys clashing. He’s going to get the defense going. I’m going to get the offense going. Now, the offense and defense are just clashing all practice. The ones, twos, threes, everybody. That’s only going to make our team better. When you’ve got guys going out there and they are preparing like they are playing a game versus people just going through the motions, it helps your team get better.”

Good thing Bell is so sold on the staff and the practices, because Broadway Joe still isn’t so sure.